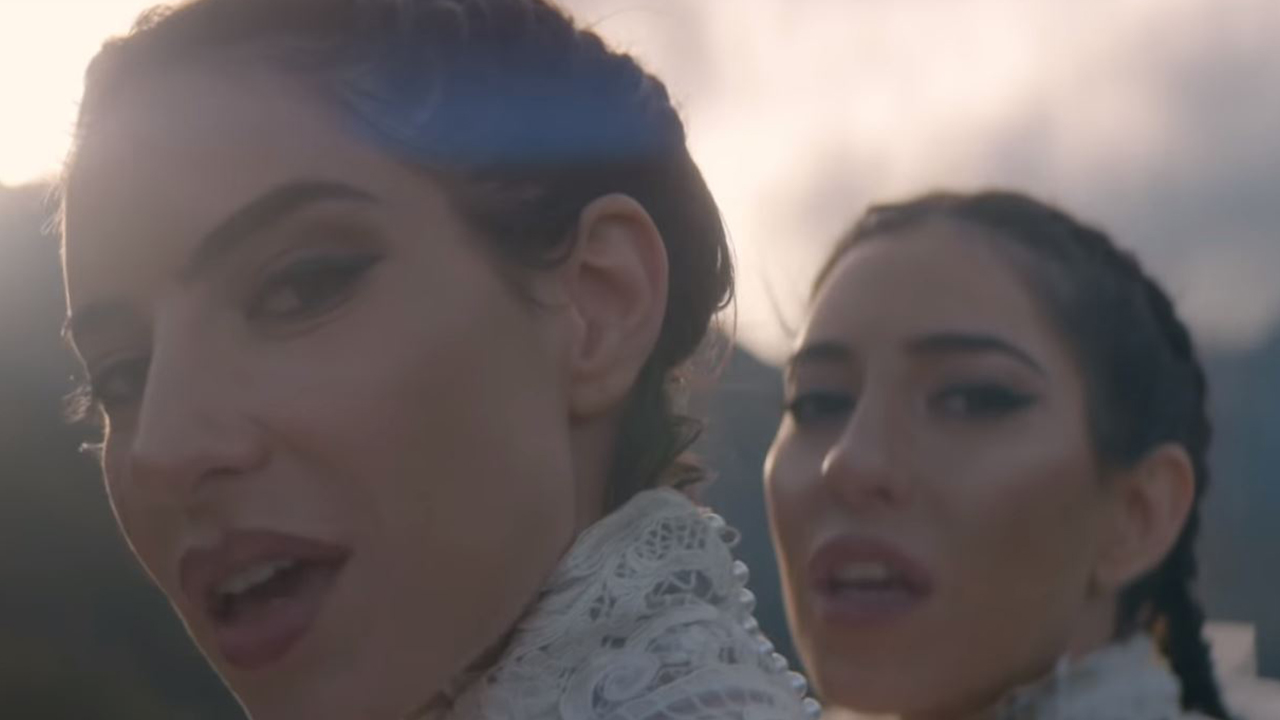 FEATURE: The Veronicas – Think Of Me (Dir. Benn Jae)

Ask the Partridge Family, The Carpenters, Neil Sedaka, hell even the girls from Beverley Hills 90210 will tell you that breaking up is hard to do. With ‘Think Of Me’ opening on The Veronicas checking themselves into an almost Gondry-esque fantastical memory erasing facility, you certainly get the feeling that this break up has been a rough one for them too.

When NZ-based director Benn Jae was brought in on this project, there was still a bit to do as far as concept goes: “I can’t give you all my secrets, but what I can tell you is the original concept was the girls, Jess and Lisa (The Veronicas), and I was brought in to bring it to life. My only notes were that they wanted it really cinematic.” 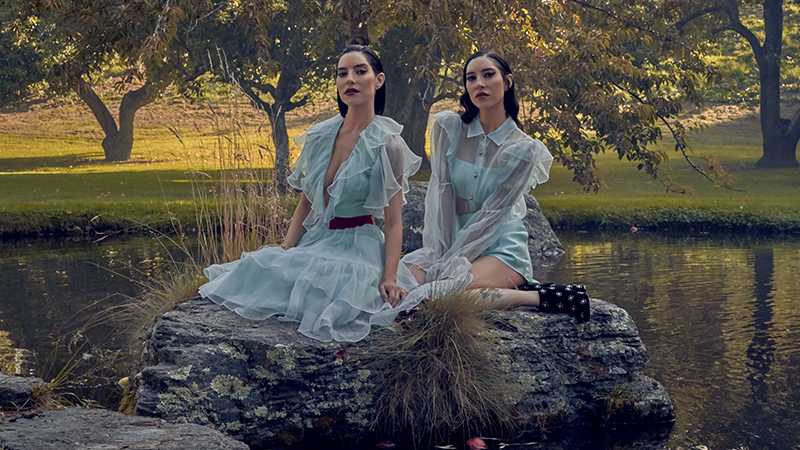 “For me there is a real beauty in the darkness of a break-up, I find it fascinating that some of us revert to some sort of utopia pretending everything is okay when it’s not and then others revert to a zombie apocalyptic saddened like state… Regardless of the process, everyone generally gets to the end of the hideously long dark tunnel; and a new day begins. Break-ups are fucked, but once you make it through it’s pretty empowering!”

Lyrically, ‘Think Of Me’ pulls absolutely no punches when it comes to the subject of the song, the ex. For many it can be a pretty important step in the process of moving on, taking the time to see your ex as the dirtbag they were, or in many cases really may not have been. There can be a level of fantasy to this coping approach, where often in a relationship we can focus on all the best things about a person, in a break up it can be therapeutic to do the opposite.

This aspect of fantasy is something that Jae has really tapped into with this video, as it depicts The Veronicas in a series of slightly surreal or idealised situations; be it night time shopping in a neon-bathed Asian grocer or floating listlessly in a magical mountain pool, there is a subtle uncanniness or dream-like quality to everything happening in the video. 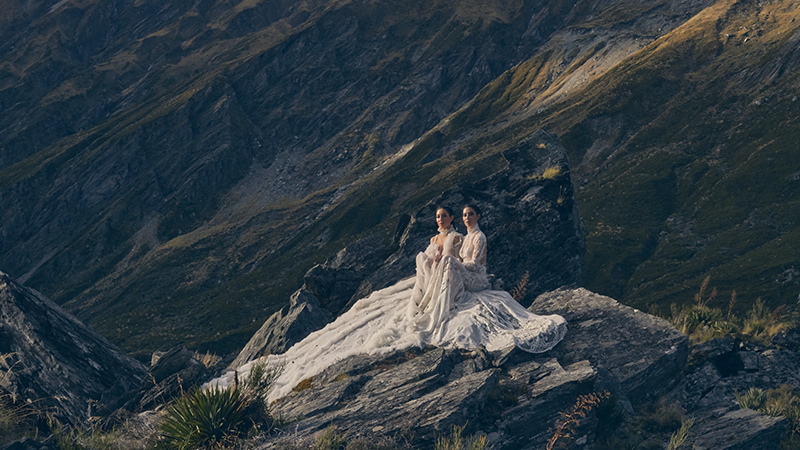 This fantasy is enhanced by the incredible locations in which the video is set. Along with the aforementioned grocery store and secluded peaceful lake, there are scenes set high up on a picture-perfect rocky mountain top and within the shell of an old house amidst some sort of fairy tale forest.

For a lot of these spots, Benn Jae has his amazing homeland to thank: “The South Island of New Zealand is my home and a lot of my work is shot there. The natural light, the landscapes, the crew, the endless location options… It doesn’t get any better (well for me anyway). Having grown up in the region I’ve been sitting on some sweet little location gems for a while… Every now and then the right idea comes along and we get to use a few of them.”

“However, the Asian grocery store was a fucking nightmare!! Our original location got canned at the very last minute, so while we were on set shooting Day One of the video, the producers (Toby Crawford and Narelle Wilson) were running around Queenstown trying to find another one. We got a lot of push back and it wasn’t until we were filming Day Two that we actually secured the supermarket…Which was being shot that evening, IT WAS SOOO DOWN TO THE WIRE! A special shout out goes to Jim’s Asian Food Mart in Queenstown, he’s the boss and it turns out an epic pop and lock dancer. Go buy some noodles from Jim!” 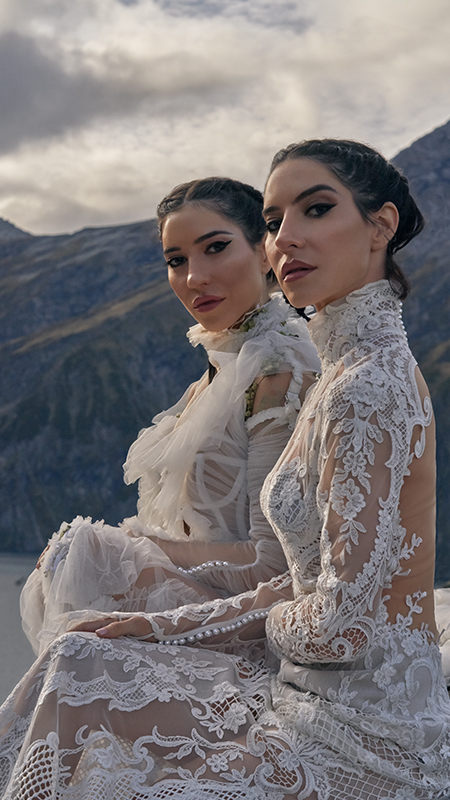 Along with the settings, Jae uses some techniques both in shooting and in the edit to bring out the dream-like quality of the locations. Namely an ever-present pink haze throughout the video and the way he uses light flares both as an addition to the shots and as a mechanism during the edit.

“Pretty much all 98% of the flares are shot in camera thanks to Ben Ruffell (DOP), however there was two or three added in post by our epic Online Artist Drew Downes for transition purposes. I love (and often use in all my work) light transitioning through cuts. For me it’s a beautiful way of pushing in and out of scenes, but done badly and it can look like total balls. I only use a light transition when there is an actual flare or practical light source for the flare ‘to be born’… If we have that, only then do we add a little bit of FX magic!”

On the apparent pink aesthetic, Jae muses: “To be honest, my partner and I laugh at pop music videos all the time (respectfully of course, I love me a pop video!) because a lot of US directors are obsessed with using pink and blue gels. I once told my partner Jay that I would NEVER do that… But I like to keep my biggest critic on his toes. #SUPRISE!”

“I bet you were expecting some really profound response… Deepest apologies. Sometimes it’s just nice to do shit ‘cause it’s fun!” 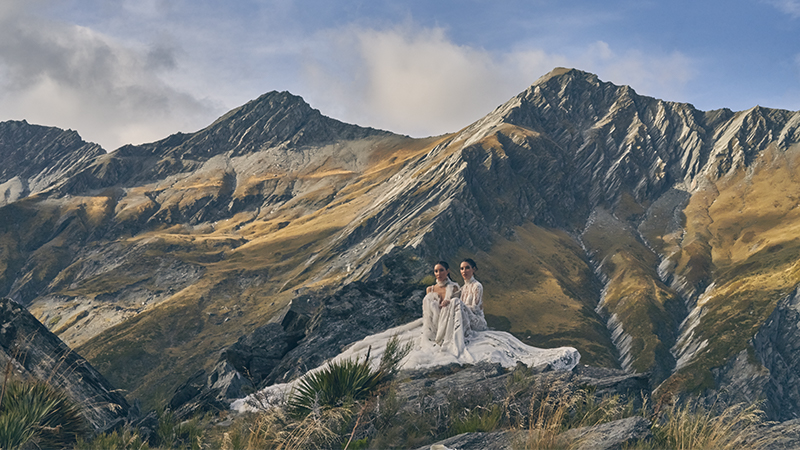 Such a refreshing attitude from Benn Jae which is apparent in a lot of his work, especially in this video for ‘Think Of Me’. While there’s certainly a deeper direction and drive at work throughout this video, there is an evident appreciation of this idea that not everything has to be motivated by some all-encompassing rousing purpose. Sometimes things can just be done because they will look good and make the video better. It can be that simple.

As the final stages of ‘Think Of Me’ are centred around stunning shots of The Veronicas sitting atop a mountain wearing outrageously long flowing white lace dresses, it is completely apparent just how beneficial this kind of honest approach can be. It can be freeing. Removing all pretence gives the video space to be exactly what it needs to be; interesting, engaging and fun.

‘Think Of Me’ has been selected in the Top 40 Finalists at CLIPPED MUSIC VIDEO FESTIVAL, happening on June 15th at SUNSTUDIOS in Sydney.

Here is the official video for “Think Of Me”