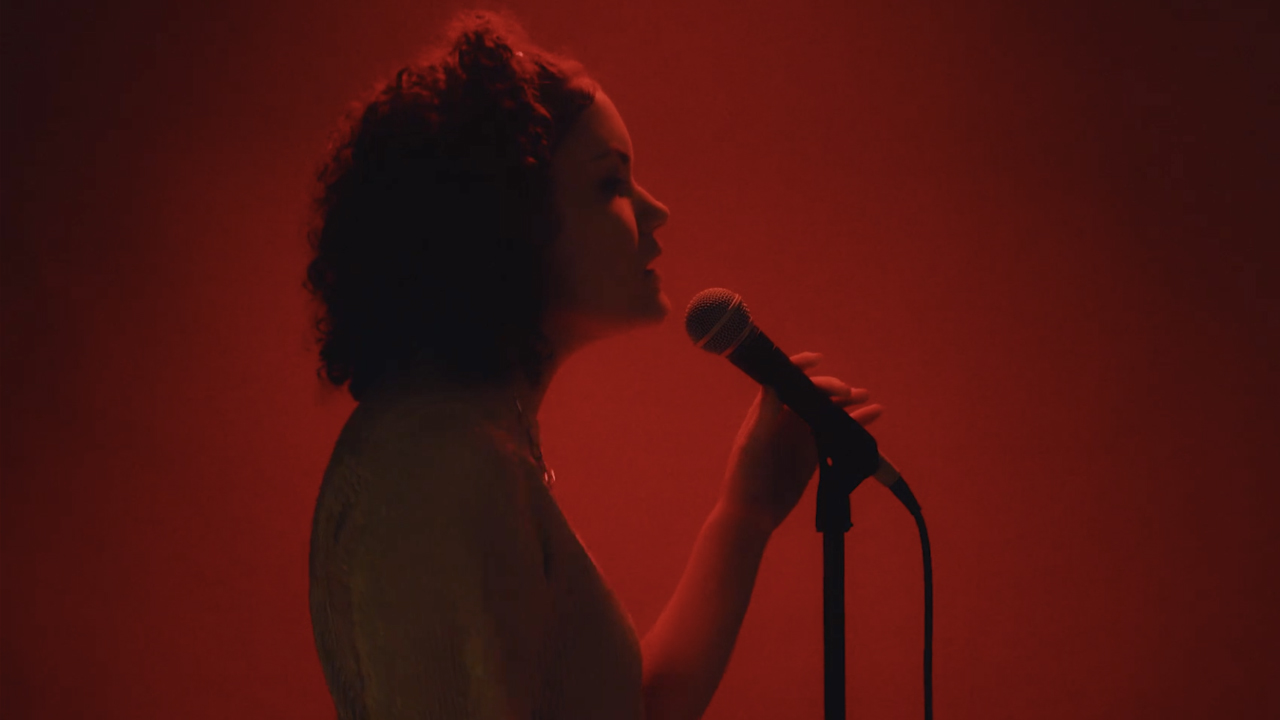 [dropcaps type=’normal’ font_size=’60’ color=’#ed145b’ background_color=” border_color=”]T[/dropcaps]he theme of Pink Matter’s new single ‘You’ll Never Know’ is inner confidence, which director Alex Greaves represented through a simple idea – have the entirety of the clip feature a one-take shot of the members performing not to an audience, but to each other.

“I’d been a big fan of Pink Matter long before they reached out to me, and I knew that they had such an organic chemistry between them that would really shine in this arrangement. I felt that having the girls face each other as they performed allowed them to really play off each other, which in the end added so much charm to the clip.”

The idea also marks a big change to the band. “This single release was also accompanying the band’s announcement that they were now a three piece, so I liked the idea of the clip acting as a sort of introduction to the new Pink Matter, both as a band and as individually brilliant musicians.” 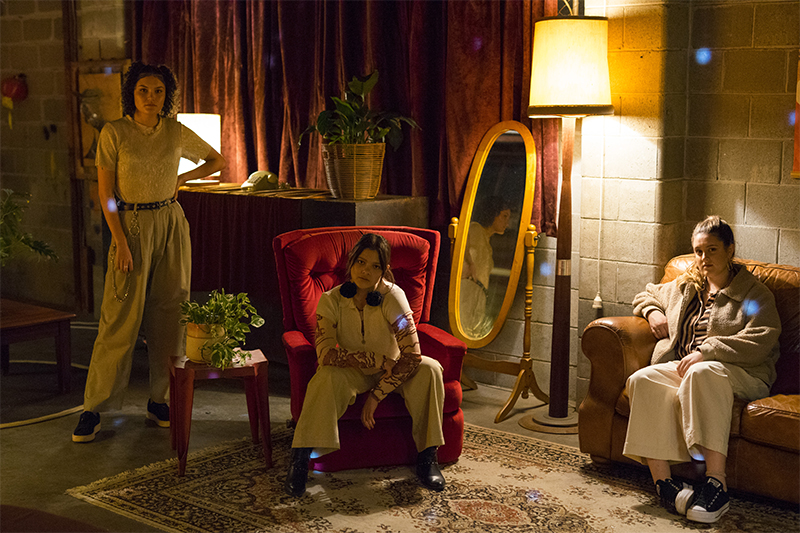 The clip was shot in a warehouse space behind Reload Espresso in Brisbane, which was transformed into an empty room with a ‘silky jazz lounge aesthetic’. This adds an element of nostalgia, and more importantly creates an intimate setting that allows viewers to fully immerse themselves in the performance. It also serves as a very pure representation of the band’s love for music and performance as there is no one to put on a show for besides for themselves.

As the clip progresses, the camera tracks all over the space and the framing moves away from focusing predominantly on close ups to wides. The framing intentionally mirrors the progression of the song from an electronic jazz influence to an energetic disco-funk style.

“The hardest thing about one shot clips is keeping the audience engaged from start to finish, so the motivation behind the camera movement was to gradually build the intrigue and keep them wanting to know more for as long as we could. The camera teases glimpses of the space and the band members early on, but you don’t fully get to take it all in until the halfway point. That’s where the song really kicks into gear as it builds up to the dance break.” 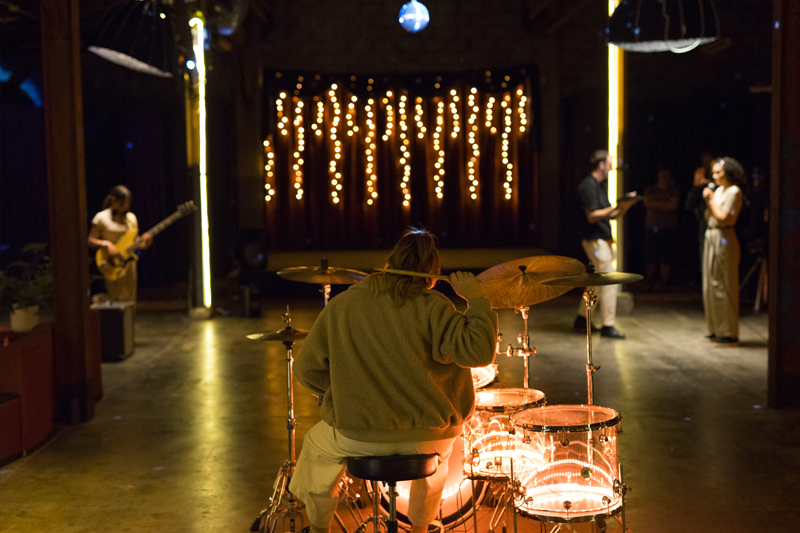 Greaves knew executing camera movement would be the biggest challenge, so he enlisted the help of Steadicam Op Alec Shultz and focus puller Connal Plunkett whose expertise greatly enhanced the production. The clip was shot using a Panasonic EVA-1 with Canon CN-E primes on a Steadicam. It was also crucial for Greaves and the team to put thorough and vigorous effort into blocking movement in the pre-production stage for success on the day.

“I’d done a couple of one-shot live clips before, so I knew that the pre-prod stage was vital in getting it all right. A big part of this on my end was listening to the song on repeat and identifying the key points that should guide the camera movement. From there, we did a thorough scout of the location, from which I did up a blocking animatic and lighting plan that set a guide for where the camera needed to be at each of those key moments in the song, and what lighting would be essential within those angles.” 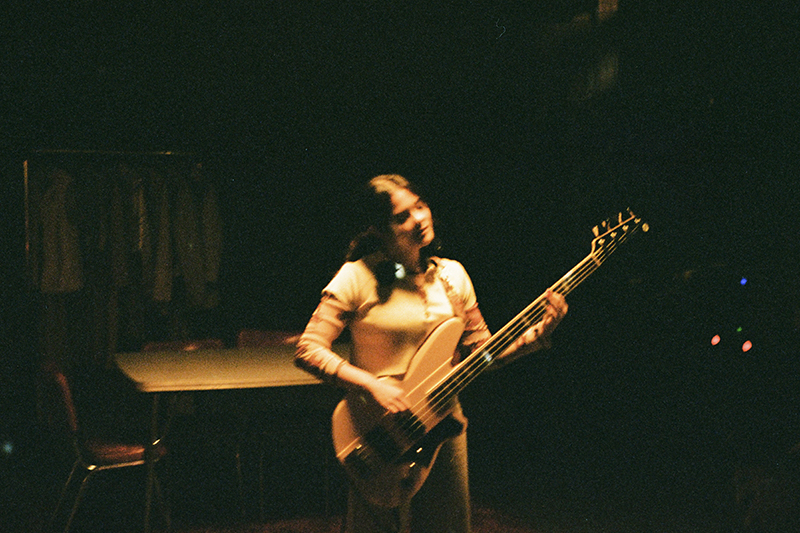 “Lighting was split up into lots of practicals and a few keys. We had two dome lights with egg crates for Kerry (vocals) and Izzy’s (bass) performance shots, and Libby’s key was from the LED’S in her drum kit. The red silhouette scene was lit with a single RGB wand and the rest of the space was plotted with practicals to fill any gaps, which included lamps, LED strips and fairy lights.”

The LEDS in the drum kit was an idea that materialised by ‘happy mistake’ from a discussion with the drummer on the day who turned out to have LEDS strips at home fitted for her kit.

Despite the changing looks, the set up did not require lighting control during the take. As Greaves explains, in the shot where we see the lead singer bathed in saturated light, singing against a red backdrop, the set up for that moment was designed to be consistent with intensity of the main lighting.

“The bulk of this look was achieved in the lighting on the day, with a single red LED silhouetting Kerry (lead singer) against the red backdrop. We didn’t want our AC to have to operate aperture as well, so we matched the intensity of this to the dome key lights that cover our main performances. We finessed the rest of the look in the grade, slightly boosting the sat and contrast of this section with a mask, and added that soft blooming effect to the highlights.” 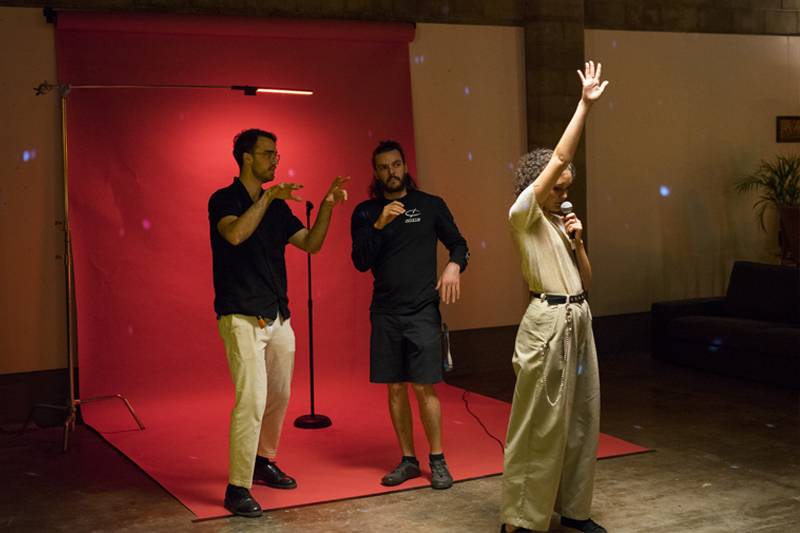 There is also a cinematic look to the clip attributable to its film emulsion look. . Greaves originally had hoped to shoot on 16mm but given budget constraints, the colourist was able to replicate it in the grading.

“A lot of work was done in the colour grade to create that filmic look we were after. The colourist, Caleb de Leon, applied a base correction, a film stock look and some analog elements. We then worked on blooming the highlights to give it that dreamy soft wash and finished it off with some teal in the shadows and orange in the highlights. Caleb also tracked a lot of masks in to help transition between the different looks within the space (particularly that red silhouette performance).”

Amongst all the fun of the camera movement, the energetic performances and the changing lights, what Greaves and Pink Matter has achieved through the clip ‘You’ll Never Know’ is celebrate the tremendous talent and power of female musicians.

Here is the official video for ‘You’ll Never Know’