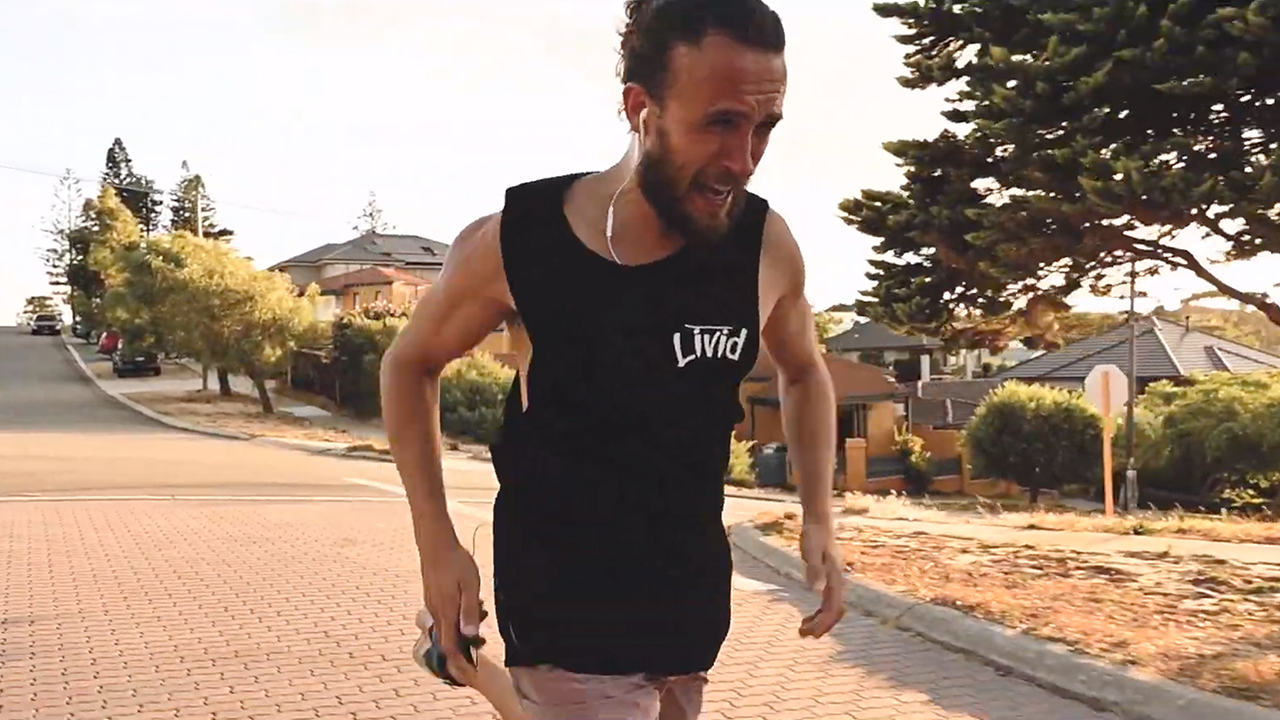 [dropcaps type=’normal’ font_size=’60’ color=’#ed145b’ background_color=” border_color=”]T[/dropcaps]he runner’s high. Elusive and mythical to those of us who are less marathon-inclined, addictive and life-affirming to those who pump the legs on the reg. It’s the burst of endorphins that comes with sustained exercise that evolutionary biologists attribute at least in part to our fight or flight instinct that joggers the world over have been able to transform into an incredibly healthy and exhilarating lifestyle.

For WA indie folk artist Ben Catley, running has become a huge part of his life and as such the basis of the video for his latest single ‘Run’: ‘Running is one of my favourite things in the world, and that’s what this song is about. So I just wanted the video to be real and true to how I go out and run most days – through the streets of Scarborough, in boardshorts and making weird facial expressions. Mouthing the lyrics while running was harder than I thought, as I didn’t consider or realise how little breath I was able to take in while doing it. That, and with how fast my mate was driving the vehicle I was following for multiple takes made for a very demanding session. I loved it, haha.”

‘Run’ is a moving and upbeat track, blending a Bon Iver-esque spaciness with a thumping rhythm and arpeggio style closer to Mumford & Sons. The song pumps along, only relenting momentarily after the first verse for a one-time meandering refrain that adds a really interesting colour to the track. When asked about this section, Catley replies: “I am certainly a fan of unorthodox structures and little surprises, so that part came quite naturally. But I did have to fight the urge to return to the slow section again, as it does feel strange initially only having a section appear once in a track. But I really wanted the majority of this song to have a driving, uplifting feeling, so only having a brief moment of stillness was intentional.”

Catley’s running-based video really suits the song’s uplifting energy, following Catley on a run through the streets of the beach-side Perth suburb of Scarborough, one continuous slow-motion shot that swells and pumps with the movements of the track. Pure, simple and strangely hypnotic. WA filmmaker Liam Fawell, the person tasked with putting Catley’s idea to film, says of the process: “One-shot videos are simply wonderful. The main emphasis to making sure it all worked was to just keep Ben focused in frame the whole time, whilst allowing the background and his actions to tell the story. The synchronicity between the speed of the car and Ben’s running pace, all helped add to the flow of the video and ultimately just made the video easy and peaceful to watch.”

A low-budget film clip often creates such a great opportunity for ingenuity, and ‘Run’ is no exception. When we posed to Fawell our mental image of him hanging out the back of a Ford Laser, camera in one hand and holding on for dear life with the other, Fawell replies: “To be honest, you’re spot on. Except instead of the Laser, it was the Toyota Camry I was hanging out the back of cruising around the streets of Scarborough. Nikon Z6 with a 24-70mm and a Ronin S, squashed up in the boot with a couple blankets and cushions around me is the epic setup we had going on. Stoked.”

Here is the official video for ‘Run‘