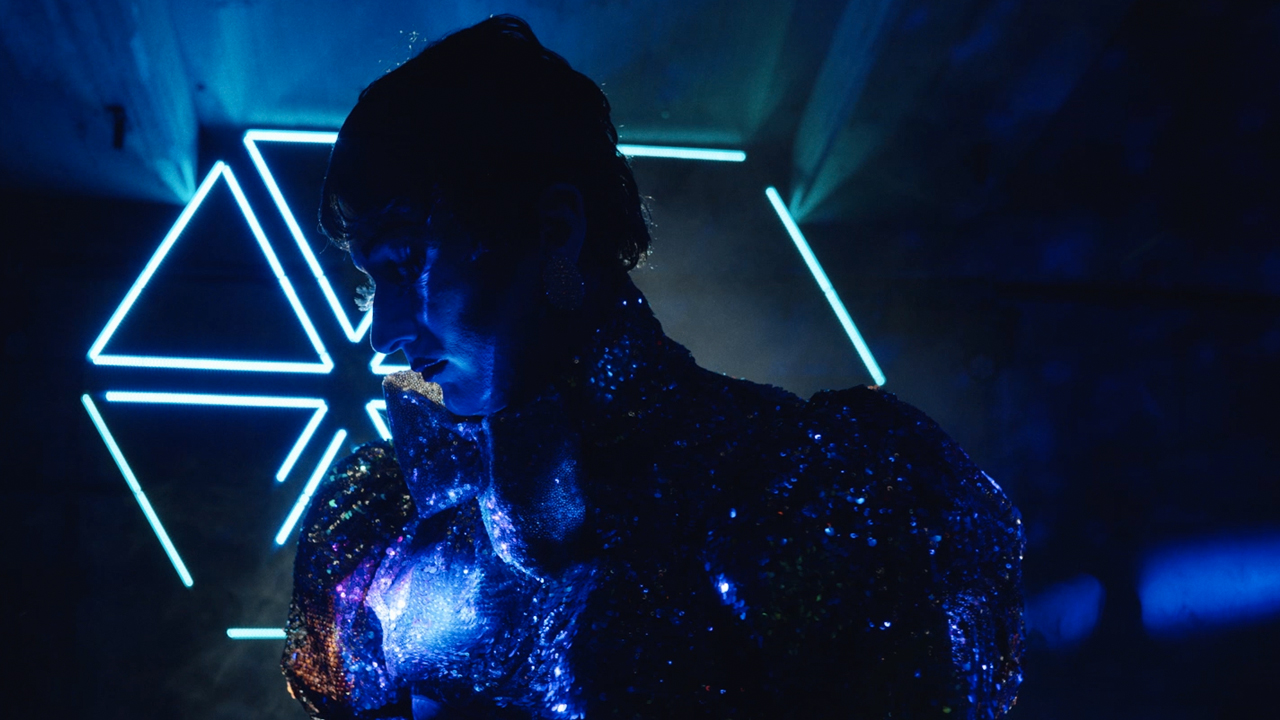 msterdam based artist BENEDICT brings us the final instalment of an emotional three-part series titled ‘The Letter.’ The track layers classical instruments, digital trills and aching lyrics that plunge headfirst into grief and hope. Evoking the likes of Matt Berniger of The National, BENEDICT constructs an intoxicating soundscape sure to leave a lump in your throat.

BENEDICT (real name Martijn Smits) self-directs and stars in the music video for the track. He explores the tangled web of emotions that attach themselves to moments of loss and fulfilment. Concluding a narrative arc that spans previous songs ‘When We Were Young’ and ‘You’ve Lost Me Before’, ‘The Letter’ is a final leap towards emotional recovery. 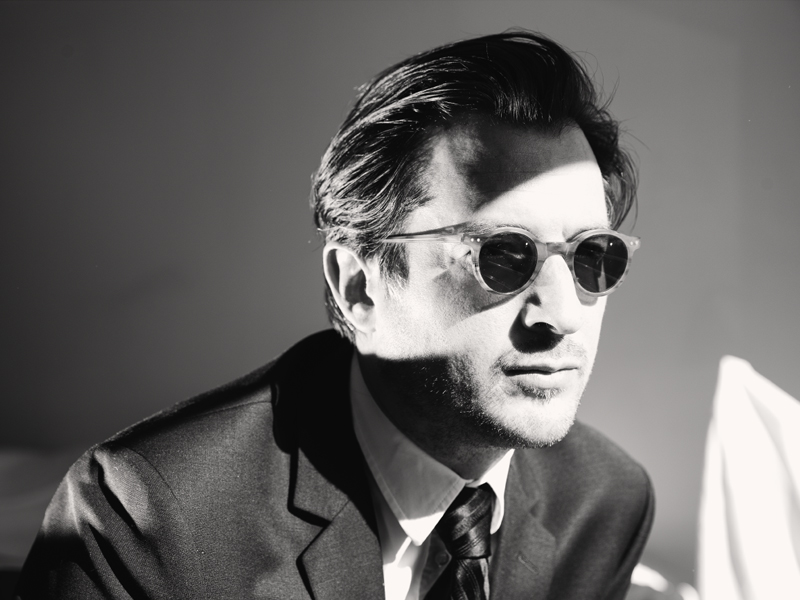 BENEDICT – The Letter (Photo of Benedict)

The ambitious two-day shoot required a green screen studio build, elaborate drag makeup and a touch of VFX magic. Martijn partnered with long-time collaborator DOP Bowie Verschuuren to bring it all to life through stunning cinematography. Both hailing from small towns in The Netherlands, the pair share a unique visual perspective that is fully realised in ‘The Letter.’ Martijn elaborates:

“Bowie (DOP) is very good at making the ideas stronger, creating better storylines and linking scenes to each other so the story stands out visually. I’ve learned it’s nice to work with someone you really know, who understands you. The concept [started] with a small idea. I shared this thought with Bowie and together pushing and pulling we got the idea to get to where it is now. 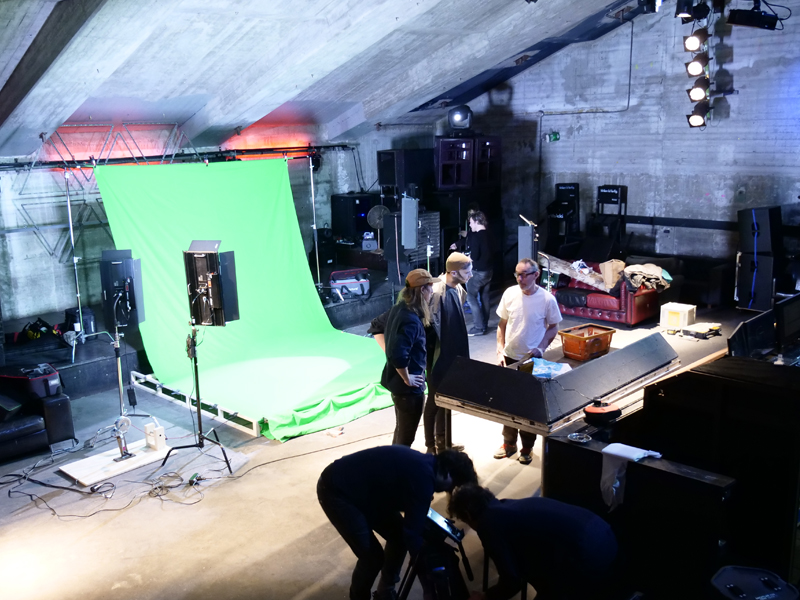 ‘The Letter’ takes inspiration from the way American suburbs are mythologised in movies like ET, Close Encounters of the Third Kind and Stand by Me. Filmed on the Panasonic SH1, the clip has a cinematic quality and delivers a hard hit of nostalgia, which Bowie Verschuuren sheds some light onto:

“The clip needed to feel like a very personal memory that at the same time has a kind of timelessness. Lots of close-ups, empty fields and nothingness, boredom, dreaming of different places.” 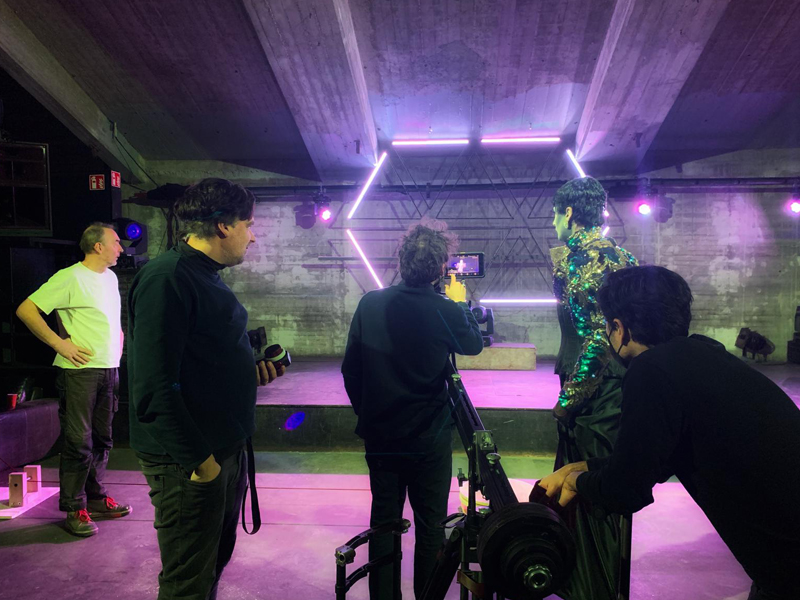 Martijn constructs two distinct narratives that play out in tandem, slowly unveiling the full picture. The first is about the paralysing stillness that follows moments of loss. We follow a young girl as she is driven through empty suburban streets, lost in grief. Cold white light and dormant snow-frosted landscapes set the thematic tone for the narrative which is one of apathy and reflection.

The second narrative by contrast, bursts to life in technicolour. We follow a mysterious hooded performer’s limousine journey to a pulsing city club scene. Vibrantly coloured spotlights illuminate the screen as they dance across champagne glasses and paparazzi camera flashes. Vintage Nikon lenses provide a warm glow and beautifully capture rows of intricate sequins that adorn the cloaked performer. 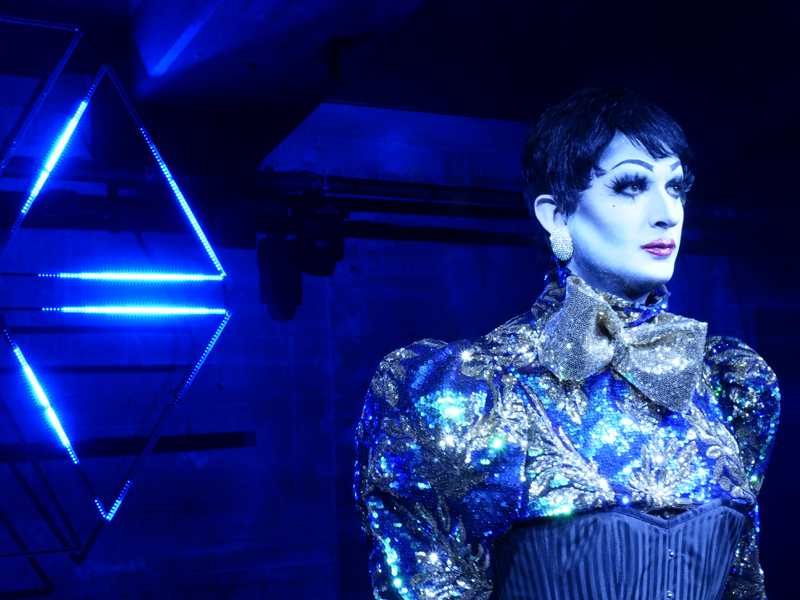 As the clip progresses, the two narratives collide. A close up shot shows the young girl seeking refuge in a shoebox of hidden treasures coiled in symbolism of childhood fantasy and adventure. A music box spills golden light as a diamond studded dancer elegantly spins. In a shot that combines slow-zoom and a flawless VFX transition, we discover the music box dancer is in fact our cloaked performer, played by Martijn himself. VFX designer Luuk Meijer unpacks his process setting up this pivotal moment:

“For the creation of [Martijn] in the music box we thought of a setup where we could turn and shoot him under the right angle. We constructed a setup where we had a small plateau which was turned by hand and placed inside a green screen…The height of the camera shooting the greens screen dictated the angle that we could shoot the music box. The trick here was to match the angle, lens and light the best we could. So the lighting as seen in the shot with the music box needed to match the light on the set with the green screen. The hardest part was to get the integration and scale in the box correct. So we decided to scale [Martijn] a bit smaller to make it appear more “correct” 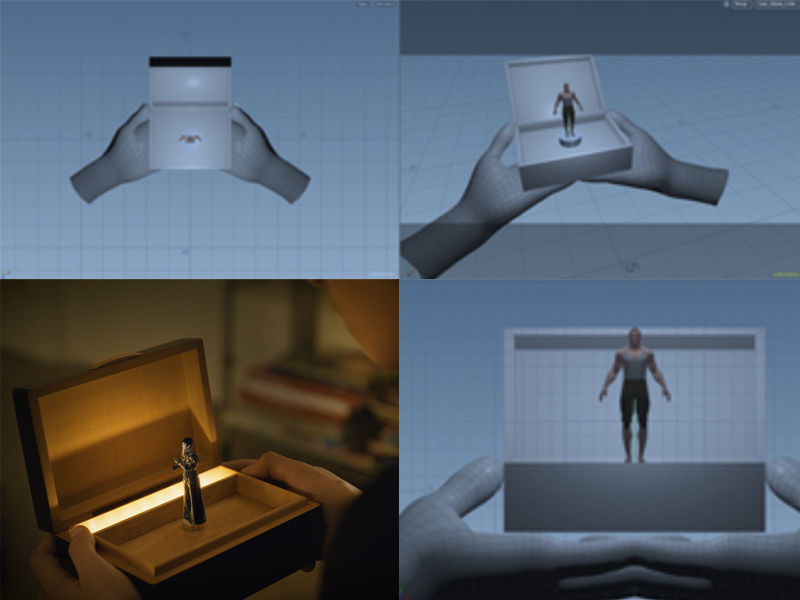 BENEDICT – The Letter (BTS showing the previs of the VFX shot)

This powerful moment gives way to a dizzying montage of Martijn and his breathtaking performance as BENEDICT. LED lights shoot across the screen, illuminating the intricate details of the set. Martijn comments on the set-build process:

“At first I thought we needed a very high green screen studio and we built a black box with all the lightning in it, [however the] project developed when more people came on board. Nadine Klingen from the Art Department suggested Club Radion Amsterdam. It was a great idea because it had everything I needed…a club, a high ceiling, more possibilities with the light than we could’ve hoped for, and a very rough atmosphere. It was all there.” 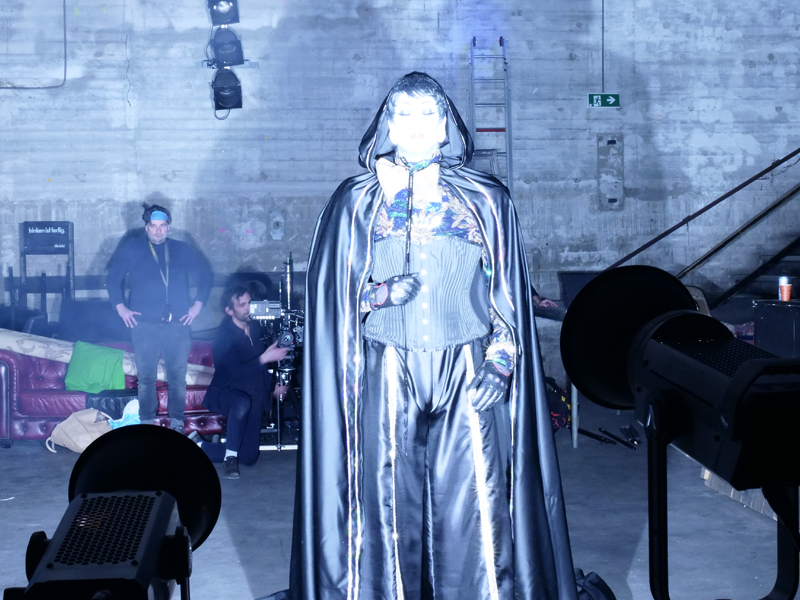 Colour, light, and energy are fully realised in costumes, makeup and styling by professional drag performer Dennis Gullikers. Dennis masterfully brings Martijn to life as a gender neutral outer-space marvel. Exaggerated cheekbones, fluffy eyelashes and a bold red lip reflect the power and awe of the performance itself.

“Liza Minelli was a strong inspiration, I was totally into her when I was a kid. Also Whitney Houston’s Queen Of The Night from The Bodyguard. It had to be shiny because we wanted to incorporate the lights in the club. The fluffy shoulders with the corset and the high wide trousers make it into a surreal magical character.” 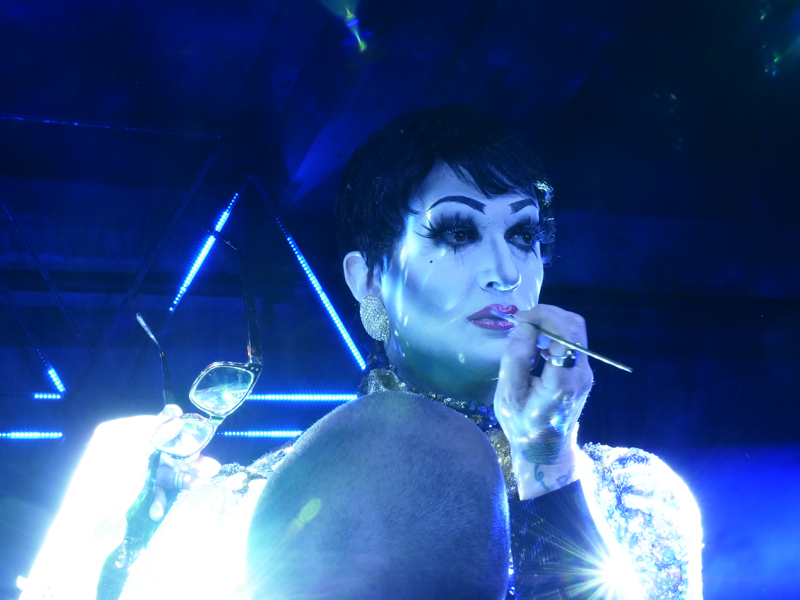 After wrapping, came a comprehensive 3-week post-production phase. Bowie refined the clip visually, injecting charm and fascination with the use of a 4:3 aspect ratio. The stylistic choice directs attention to meticulously staged shots, and gives further strength to the themes and subjects explored. Bowie unpacks the process:

“You are always looking for a kind of rhythm in the editing phase which doesn’t always necessarily correspond to the music. Especially because we were cutting back and forth between two different storylines. You’re constantly asking yourself what works, feels natural, and still carries the music. This part took the longest. The eventual grading was pretty straightforward…the images already looked very nice, it was just a matter of enhancing them.” 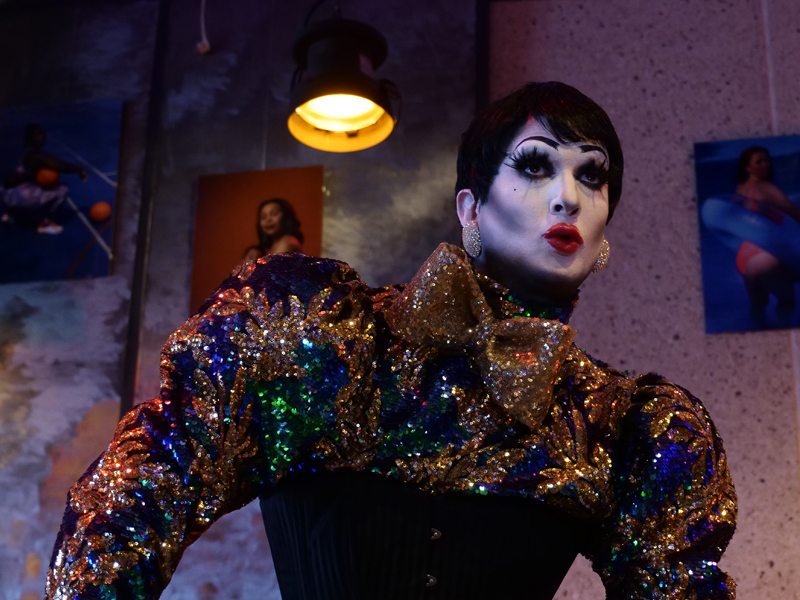 The dazzling world created by Martijn Smits and his team both captivates and inspires. The clip embodies the spirit of track as it explores the moments that mark us and the spectacular heaven on the other side of pain.

“It is the grande finale of a creative period. The song, the video, it all adds up the things I’ve learned in the last few years. It’s an encouragement for every one out there to do what you want to do with your life. Don’t let anyone stop you.”

Here is the official video for ‘The Letter’