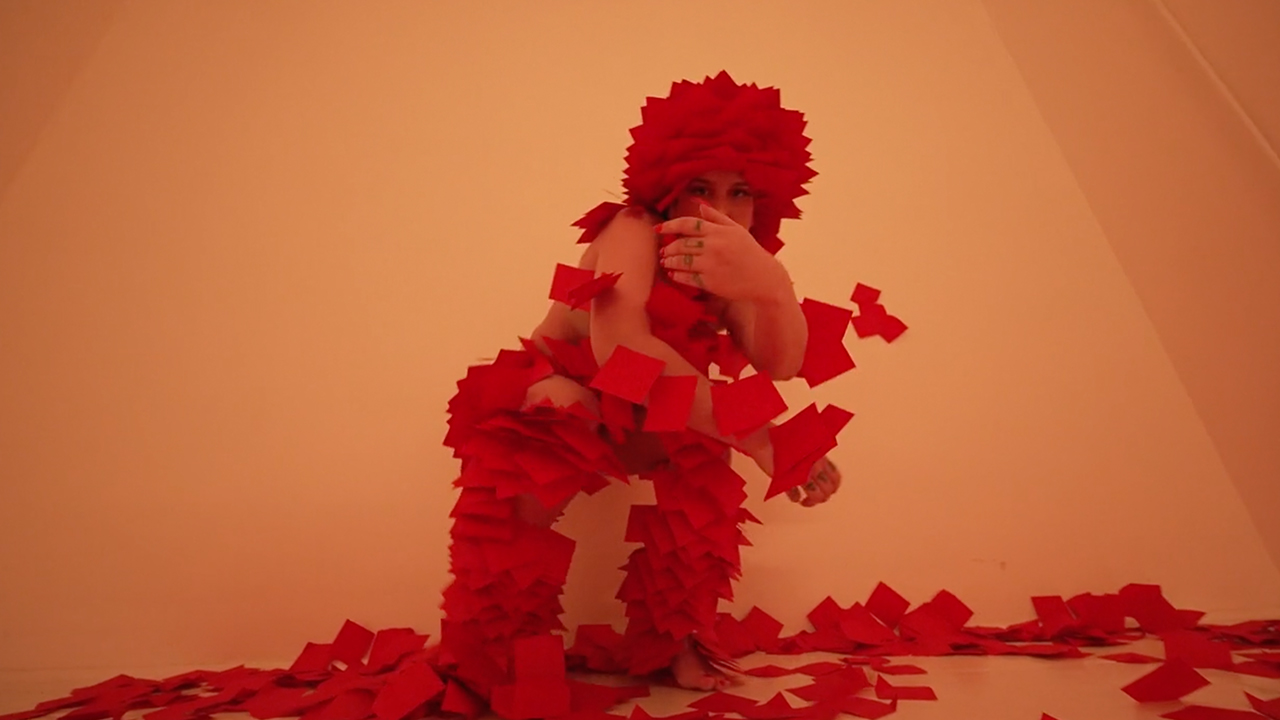 If the words “Post-It note creature” don’t already have you clicking play on this video, I’m sorry, I’m just not sure there’s any hope for you. It’s just such a wonderfully simple concept that directors Alice Plati and Charlotte Mungomery have brought about for this new drop from New York producer Cofaxx.

It’s so pure and yet so creative, much like the way the idea itself came about. Charlotte Mungomery tells: “We conceptualised the video last year in the middle of the Fall in NYC. As an Australian, this was my first time experiencing autumn in its most extreme and I was in constant awe of the landscape’s transformation and the playful dance of the leaves as the trees shed their foliage. I wondered whether it would be possible to capture the essence of this transitory season in a dance/costume collaboration and pitched the idea to Alice.”

“Coincidentally, around this time I was in the process of attempting to beat the Guinness World Record for ‘most Post-It notes stuck to a face in a minute’ (I was pretty close). One night, on a failed record attempt, as I shook the sticky notes from my face the way they fell mirrored the falling leaves outside and in that moment, I knew that Post-It notes were the answer.” 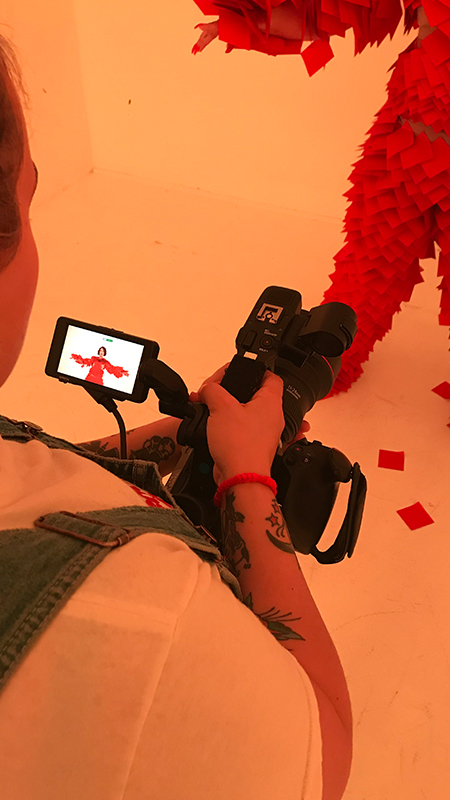 The only thing cooler than that story about a flash of inspiration coming mid-World Record attempt is the actual Post-It note suits themselves. They are almost Jim Henson-esque in their shape and boldness. Cascading waves of billowy feather-like brightly coloured Post-It notes that so beautifully fall and flutter from the dancer as she moves.

Mungomery explains that, while quite simple in concept, practically the suits were anything but: “There are two ‘suits’ used in the video. The first suit I had pre-made by hot-gluing the Post-Its to a body stocking & headpiece. This was a time-consuming build however it gave us more freedom during the shoot.”

“The second suit (the Red suit, seen first in the video) involved a simple and hilarious construction process which saw Alice and myself physically sticking 3000 post-it notes to Elayna’s body before the shoot. This costume provided us with a delightful challenge as we only had one chance to shoot the shedding of this suit and we’d never tested this. Working with ephemerality and unpredictability in this way was wildly exciting and whilst it required deeper planning it proved to be a beautiful collaboration between dancer, costume & camera.” 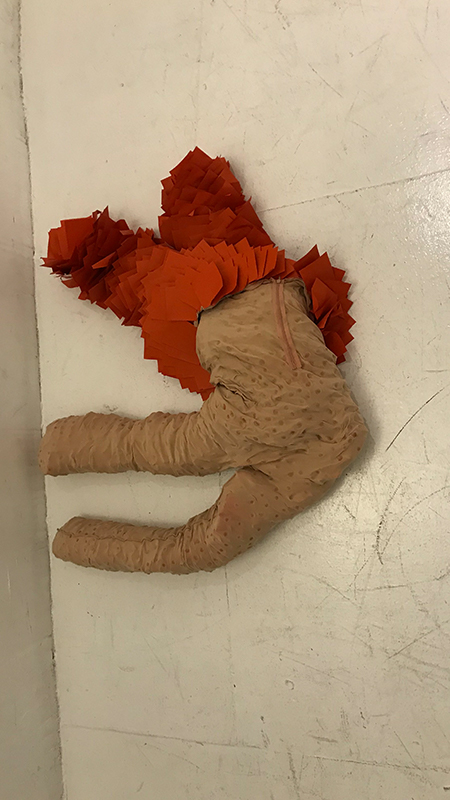 The dancer, Elayna Lopez, brings so much character to the suit and consequently the video. In the first phase, it feels like she is shedding the leaves in this flowing expressive metamorphosis. Whereas in the second iteration, the dancing takes on a slightly more jagged and poppy feel.

We asked the directors about the process and nature of working with Lopez on this shoot, Alice Plati replies: “I met Elayna when I was fifteen years old at a dance party in the Lower East Side of Manhattan. She was in the middle of a dance circle and truly captivated everyone around her. Not all dancers are proficient at improvisation but Elayna is brilliant at it.”

”She loved the song and felt comfortable entering the project without choreographing. As someone who films a lot of dance videos, I think I’ve grown to prefer editing improvisational movements as opposed to choreographed ones. It makes the process a little more exciting for me because the potential narratives are somewhat limitless.” 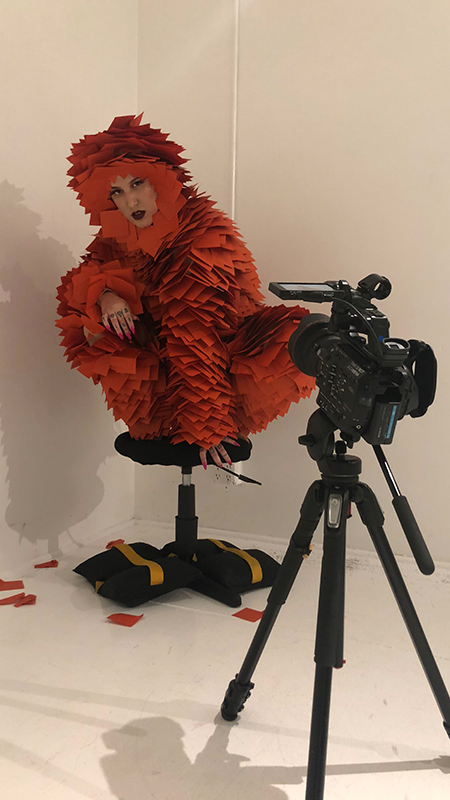 Plati and Mungomery really do embrace Lopez’s talents in this video, setting the entire clip within an incredibly understated, empty off-white room. Not only does this dank space really suit the basement-y vibe of the track, it ensures that the focus is entirely on Lopez.

Plati elaborates: “The costume is such an integral part of this video; we wanted to celebrate its form and colours as much as possible. We made the decision to work in the stark white room to intensify both the vivid reds and textures of the Post-Its. The emptiness of the space also keeps the viewer solely engaged in Elayna’s movements and the transformation of the costume.”

The stark setting also makes for a very interesting edit. With the unchanging background and predominantly unmoving camera angle, the edit creates the whole dynamic of the video by cutting through the dancer’s movements and piecing them together like this powerful undulating force. In the second phase of the video, the camera becomes completely static, making for some awesome jumps between Lopez’s movements and even allowing for some very cool overlaying effects. 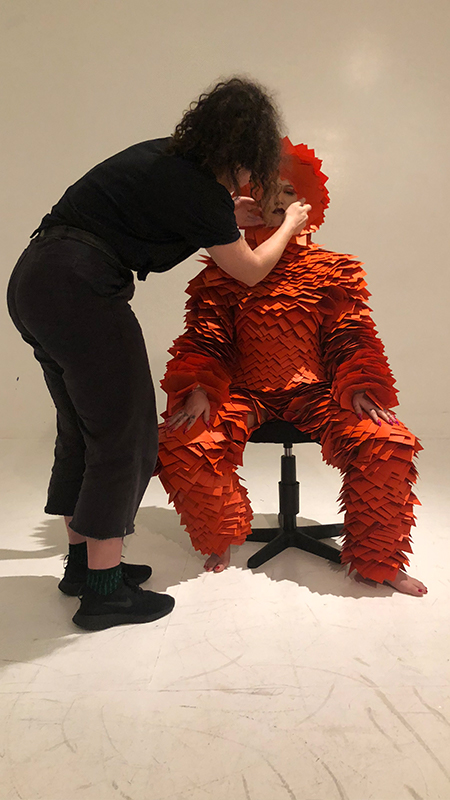 This feeling of the dancer being this indefinable force is enhanced by the way the camera is angled upwards at them, creating this feeling of presence about the character. When asked about this approach, Plati replies: “Framing from a low angle is consistent in my practice. In both my photographic and video work, I am drawn to representing my subjects as angelic and powerful. My love of photography came from the desire to express my affection for my friends. I wanted to make them feel special and beautiful.”

“The strategy of leveling beneath them is a way of conveying their importance to me; painting them as larger than life. I am also a very tiny person, so I quite literally look up at most of my peers. As a result, this approach comes naturally because it is the way I often observe people.” 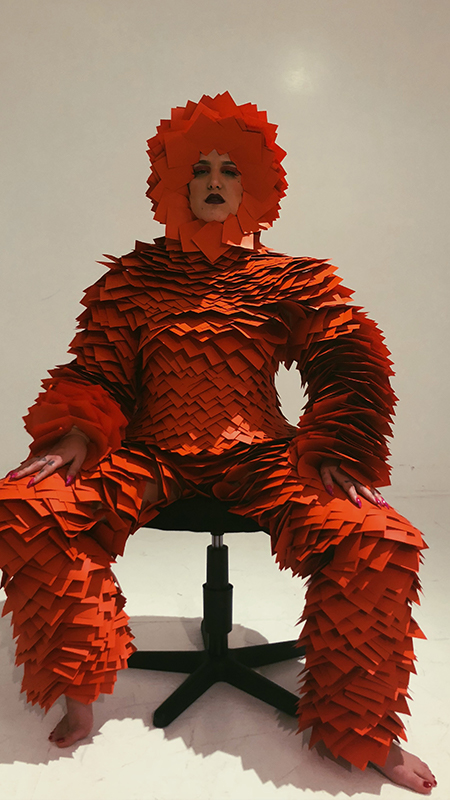 To have been able to get so much character from this wonderfully simple concept is truly commendable. Speaking with Mungomery and Plati, it becomes more and more apparent how much of this shoot had to be about reacting to what was happening, be it the chaotic nature of the Post-It notes, or the improvised nature of Elayna Lopez’s dancing. As a result, there is an energy about this video that is almost indescribable, and at the same time, utterly infectious.

Here is the official video for “Melodrama”