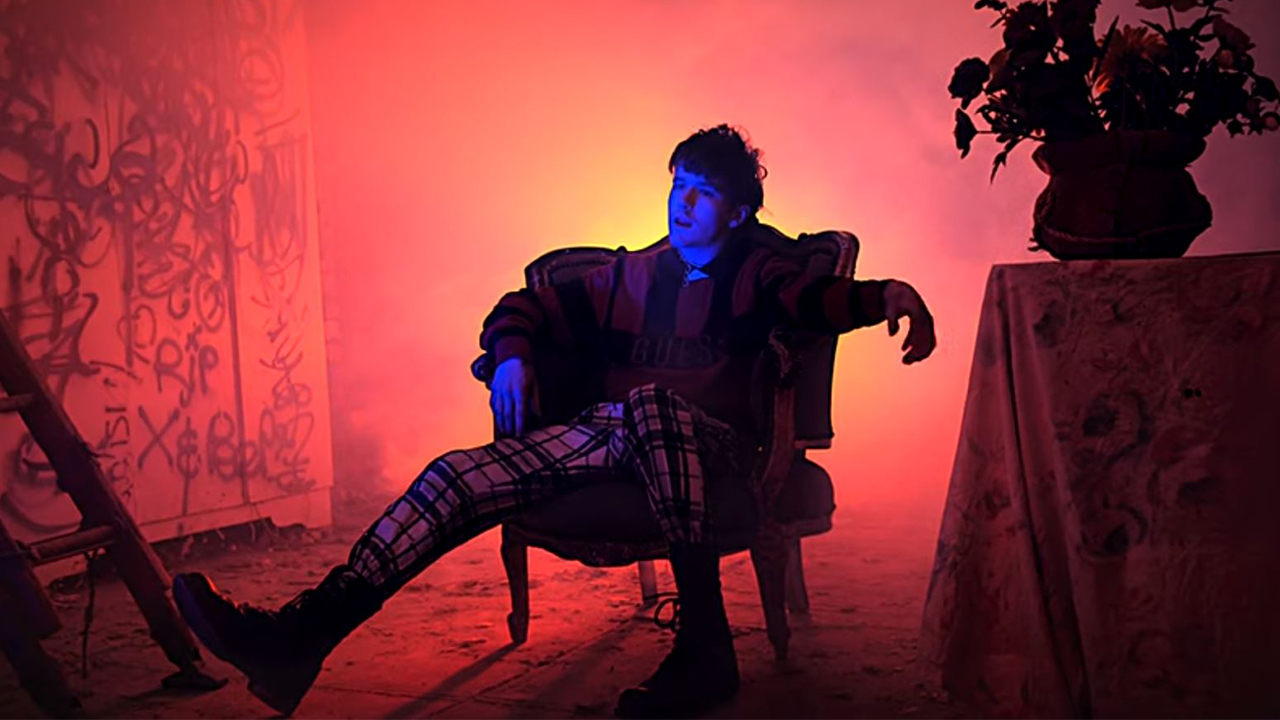 Melbourne new wave dream rockers Pretty Bleak describe their new single ‘Jawline’ as being about “finding a personal balance between vanity and pragmatism. Being able to utilise hedonism and direct it towards something beneficial, rather than frivolous or trivial.” Vocalist Sam Thomas adds: “The intention of it was to try and write something that could be seen as a more straightforward kind of mainstream single, without compromising the more unique aspects of the sound.” 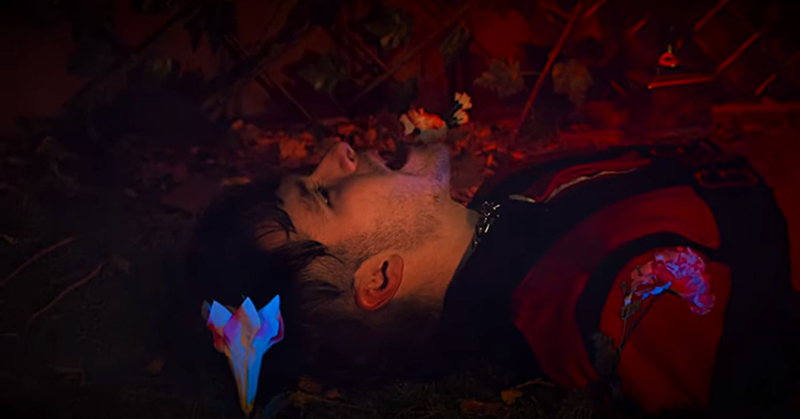 It is in these slightly darker-toned intricacies of the song that sit amidst the bounding beaming track, that director Tom Thomas found his inspiration for the video: “At its core, ‘Jawline’ is a pop song, however I chose to focus on the song’s darker elements and accentuate those vibes through the use of surreal, horror-esque visuals. I drew inspiration from horror movies of the 70’s and 80’s, such as Dario Argento’s Suspiria, to establish a nightmarish setting for the video.”

The video follows the band’s performance within an old ramshackle workshed, saturated in extreme colour, using the contrast and shadow present to evoke a slightly sinister feeling. The setting’s own menacing qualities are heightened by some additional props and production design such as a haunted house-esque chair, some withering flowers and even a gravestone. As Tom Thomas explains: “Admittedly a lot of the work was done for me, as the building was already extremely dilapidated. The grungy imagery of the cracked bricks, overgrown vines and cobwebs was almost enough on its own, considering that the lighting would play a predominant role in establishing the visual style.” 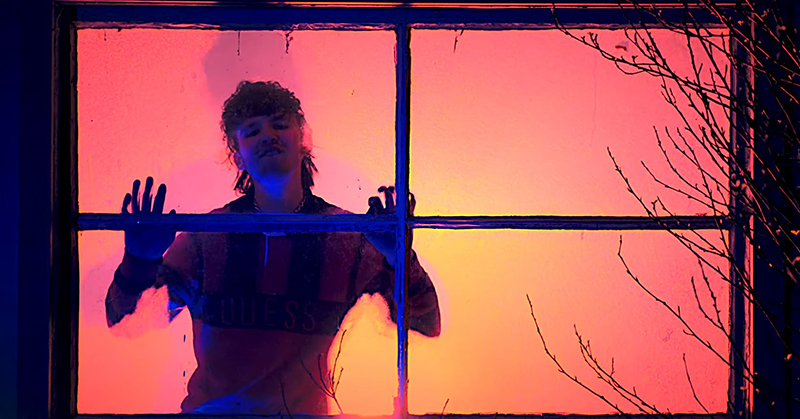 “I simply took what was there and aimed to infuse a bit more surrealism into it with the golden antique lamps, photo frames and chair. I also further accentuated the naturally overgrown look of the setting by laying out rolls of synthetic grass and gluing synthetic flowers to them. To add some more diversity in the texture of the setting I stacked broken wooden pallets in various places, most noticeably in the corner next to the window. They give off somewhat of a haunted house vibe which I liked. The gravestone was a last-minute addition to the video. I felt there needed to be one more visual staple on top of the lamp, chair and mirror, for the end of the video. I quickly made it out of foam and plaster before the final night of shooting. I was worried it would end up looking a bit cheesy, but no one seems to think so, thankfully. Being a massive fan of horror films, I had a lot of fun creating the setting for this video, and am really glad the band was happy with the final outcome.”

As Thomas mentions, the extreme lighting is such an important part of the aesthetic of this video, as it is wholly what takes the video into that realm of fantasy and horror. Deciding to really commit to the saturation of colour is so important, and yet there is somehow still restraint in the way that the lighting is structured. Mid-section scenes of the vocalist lit blue from the front in front of this chaotic smoky orange and yellow background are particularly awesome. 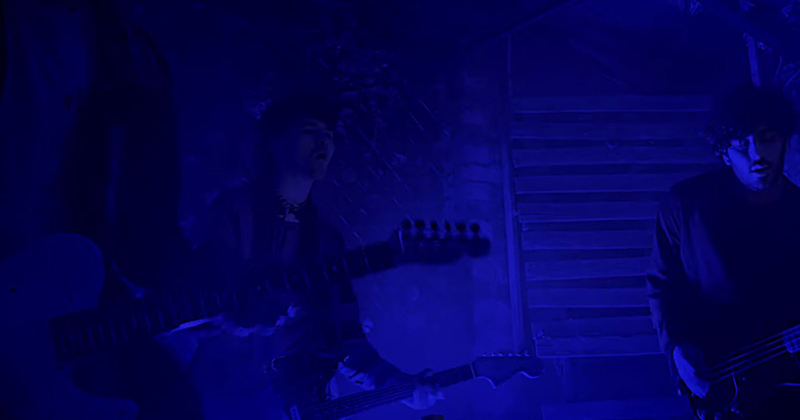 Thomas elaborates on his approach: “To keep the visuals interesting, I wanted to avoid using the same lighting/aesthetic for the whole video. Especially considering it was shot in one (extremely confined) location. Essentially, I split the video into three sections, and changed the lighting for each one. Beginning with it being somewhat understated and a little more moody, allowing the character of the setting to take the forefront. Then contrasting that with the more striking, vibrant and surreal visuals for the second section and the bulk of the video, using the lighting as the visual centrepiece and almost allowing the physical setting to dissipate completely. For the third and final section, it made the most sense to contrast the vivid, overbearing lighting used previously, with visuals that were the exact opposite- being cold, and monochromatic blue. I chose to intercut shots in this style throughout the duration of the video, to avoid it seeming too fragmented and disconnected.”

For such an upbeat poppy driving track, the choice to focus on the darker subtleties is an intriguing one. However, instead of feeling like a mismatch, the video makes the viewer more aware of this other quality that is not immediately present in the music. So not only does it make for something fun and different to what would normally be seen, it also further engages the viewer in the music. 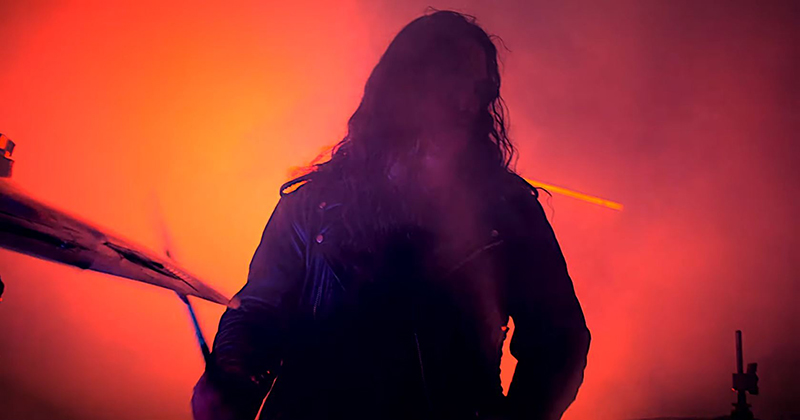 This deeper understanding and engagement was certainly important to Pretty Bleak, as well: “It was definitely our intention from the start to make a video that complimented the more somber undertones of the song. Tom was definitely the right fit for the video because he understands the line between decadent, exaggerated pop stereotypes and the dark, obscurities that our music exists within, and he has a vision about how we can manifest that in the visuals. Creating a dirty and menacing looking set and then lighting it with strikingly vibrant colours and smoke effects is a really complimenting analogy for the sound of the song.”

Here is the official video for “Jawlines”