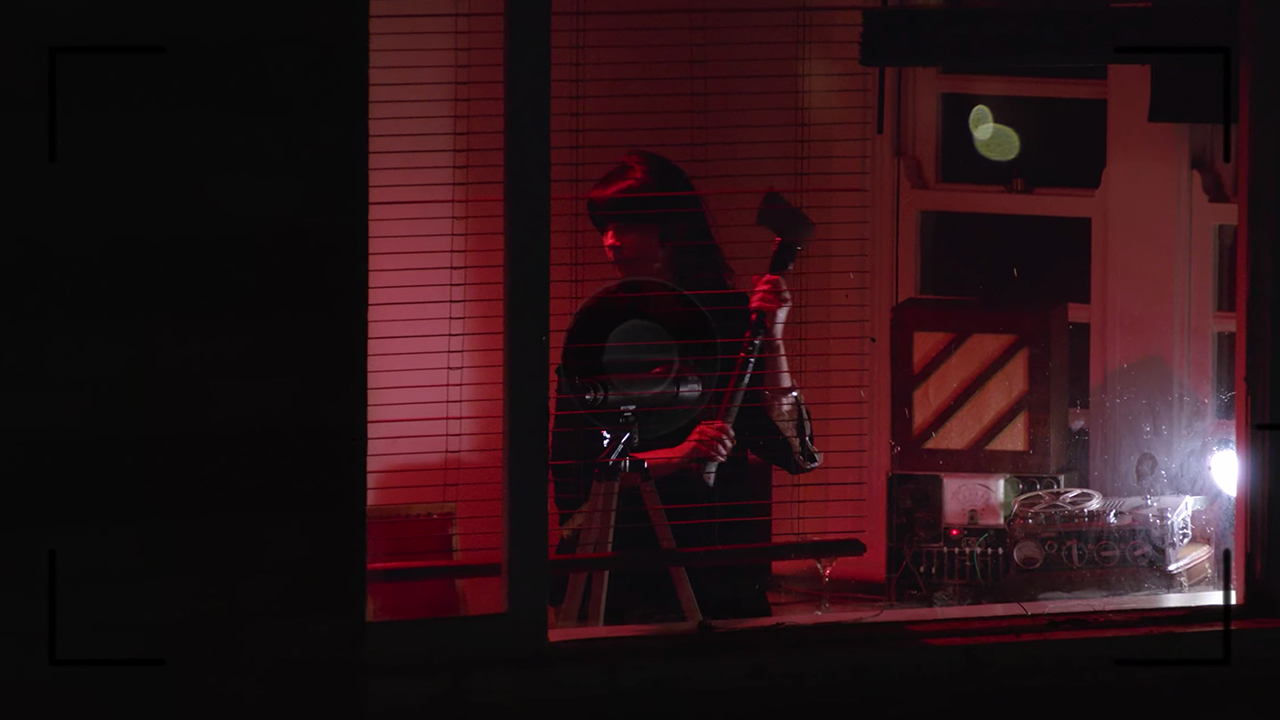 by Anth Webster
0 comments
[dropcaps type=’normal’ font_size=’60’ color=’#ed145b’ background_color=” border_color=”]I[/dropcaps]t is inevitable that isolation is making people re-think the way we do things. Not only is it the massive amounts of downtime that have gotten some creative motors whirring, but also the ‘adapt to survive’ mentality that many are having to adopt. After the first wave of isolation music videos that were generally a variation on a Zoom call performance, we are now seeing some iso gold starting to rise to the surface. 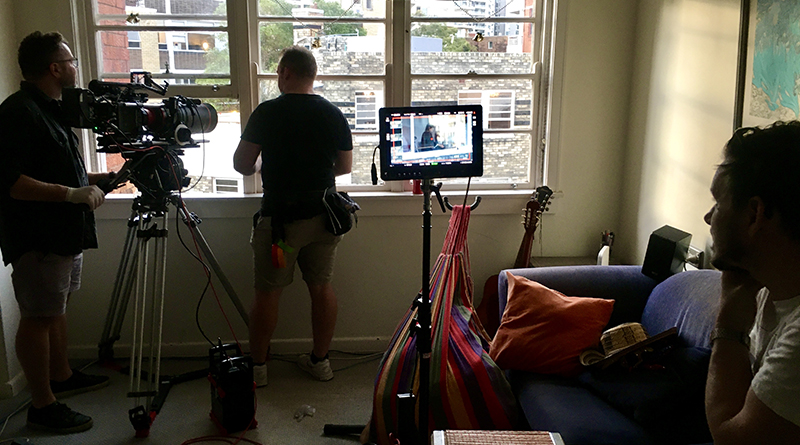 When Sydney alt-rock duo The Wednesday Night were looking to put together a video for their newest single ‘The Perfect Scene’ it was friend, former band member and filmmaker Andrew Lancaster who got the call: “Laura and Rob asked me to do the clip because when I was playing in the band I always said I’d love to do a noir clip for this song.” Lancaster details, “The idea came about thinking – what can we actually do given the COVID situation?”

“I’ve always been a huge fan of cold war style spy craft and I have a flat with neighbours all around, so when I suggested just a few days before the shoot a Rear Window inspired scene where Laura kills Rob in a tragic ‘axe-ident’, there wasn’t any resistance from the band. It was a really spontaneous process. Rob brought the axe, Laura brought the cocktails. They were perfect muses with their serious performances bringing out a dark kind of comedy in the song that might play into the corrupt minds of those in isolation.” 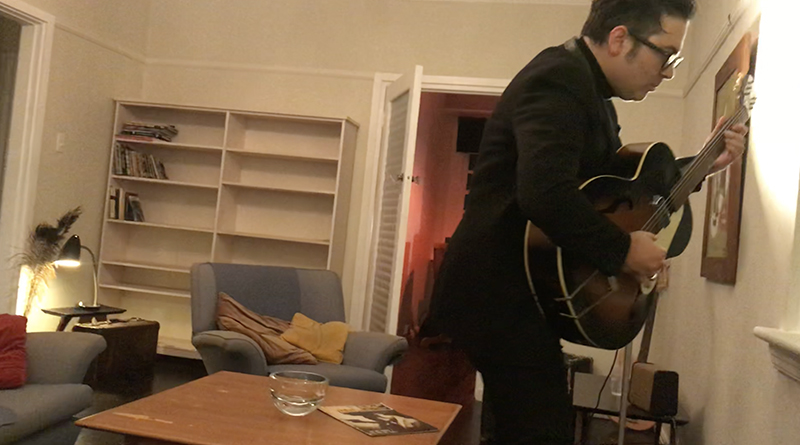 ‘The Perfect Scene’ musically has this awesome cinematic quality to it. Dreamy vocals over delay-laden guitars and this kind of Nick Cave darkness about everything, the song evokes a sense of mystery and intrigue, making it a perfect fit for this voyeuristic suspenseful music video approach. As The Wednesday Night guitarist Rob Young puts it so well: “All music conjures some sort of imagery in the mind’s eye and ‘The Perfect Scene’ certainly has a noir aspect to it, so Andrew’s certainly nailed the vibe while giving it the Hitchcock twist.”

Laura Murdoch, the group’s vocalist, adds: “In a way. The story was always dark noir and didn’t really make any sense, so that fits a bit.  The two verses are really telling two completely different stories. The latter I always imagined set in a classic Bates style motel with a broken neon sign flashing away, real cliché. In the first verse, I pictured an apartment block in New York, with wallpaper peeling off the walls so I guess that fits. Only, the apartment we shot the clip in is really a very nice apartment, wallpaper intact. Andrew and his team created something that completely exceeded our expectations though. They are very clever.” 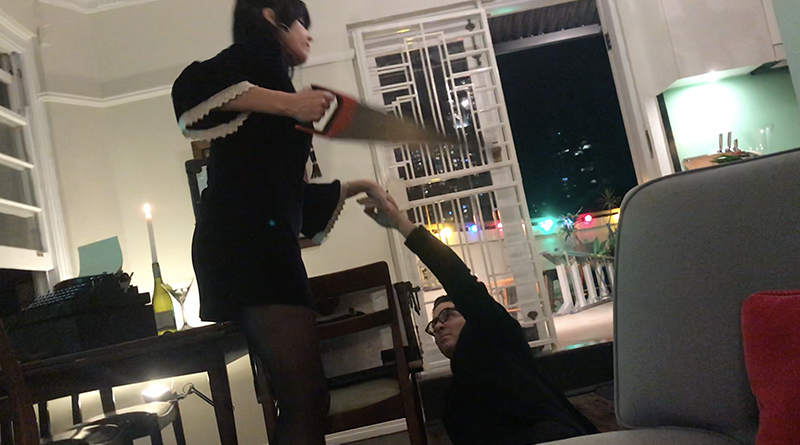 The video, entirely shot from the viewpoint of a voyeur from across the street’s telephoto lens, follows Murdoch and Young as they move from room to room through a moodily lit apartment, the tension building as their encounter gradually progresses from outwardly innocent to positively deadly. It is such an interesting and well-executed approach, so much so that you can tell that even though it came about through necessity via isolation, once that was the way forward, everyone involved really dived in to the concept.

“We rehearsed the clip together as a ‘one take’ idea with all the actions choreographed to the song.” Lancaster recalls, “Then during the shoot Simon Ozolins our DOP and I were filming from the neighbours window across the road on an Alexa with a huge 400mm lens. We could see each other and signal across with big gestures, but I needed to be by the monitor, so I generated the playback via a WhatsApp call that was playing out of a boom box in the flat, which meant I could also call out over the music with specific cues. There was a delay in the sound and a few dropouts and technical glitches, I thought at one point Laura might kill me next… There’s not a lot of editing as it’s mostly one take but using the snapshots for effect. Rob borrowed the title font from Rear Window which is perfect, and Suriya (Black, colourist) brought out the iso-mood in the colour grade.”

For such a different and ambitious approach to shooting, we had to know what the experience of acting in a completely separate building to your director was like for the video’s stars. Murdoch replies: “We are not used to acting so that must have been fun for Andrew. I had to kill Rob over and over again which was great! Andrew said we had to be really serious or else it wouldn’t work so Rob and I tried to make very grumpy serious face for the entire shoot. This was very funny though so it was quite difficult to play it straight… Eventually Andrew was just leaning out the window and shouting very loudly at us from the apartment on the other side of the street.” 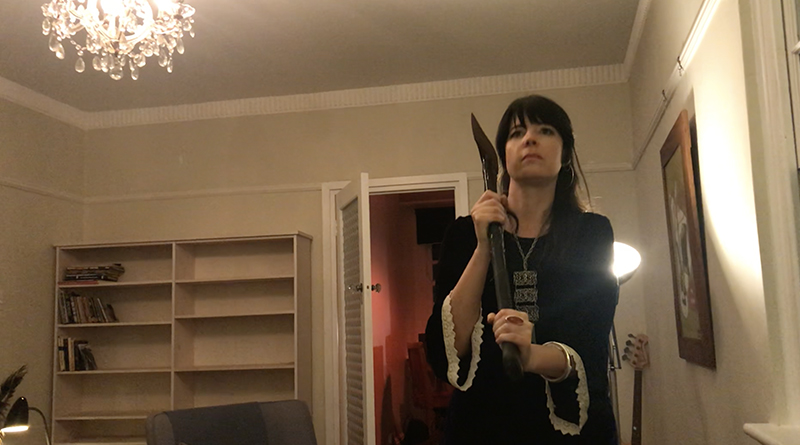 Young elaborates on how this inter-building directed played out: “As it was a lockdown, there was quite the audience watching from nearby balconies and windows, curious as to what the ruckus was and probably somewhat concerned that Laura was traipsing about with a large axe… We had a great time. I reckon Laura absolutely aced it, killer performance… It’s a wonderful outcome given the strange circumstances we’re all dealing with. We’re thrilled with what Andrew’s made.”

Here is the official video for ‘The Perfect Scene’