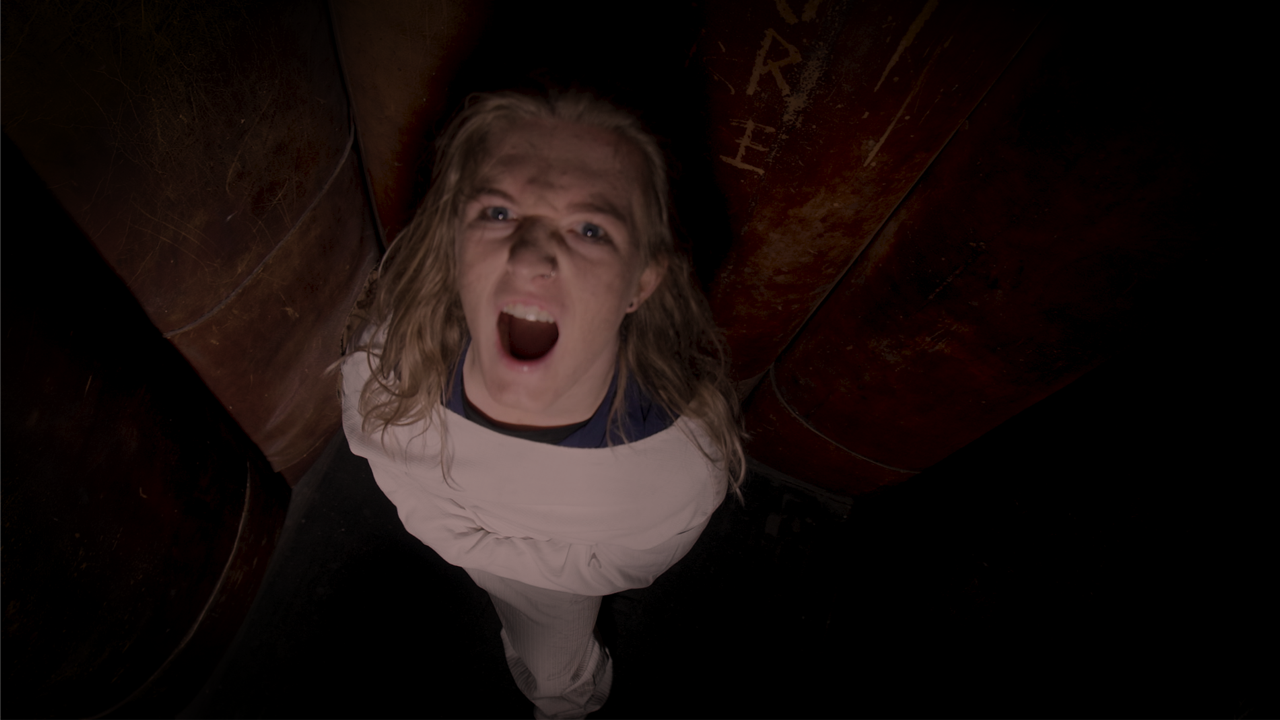 PREMIERE: The Witching Hour – Under My Skin (Dir. Allan Brady)

[dropcaps type=’normal’ font_size=’60’ color=’#ed145b’ background_color=” border_color=”]C[/dropcaps]entral Coast hard rock band The Witching Hour have an undeniable throwback quality to what they do. Their big powerful riff sections, driving half-time rhythms and gruff vocals hearken back to that golden age of grunge and heavy rock that is the 90s and early 2000s. In ‘Under My Skin’, The Witching Hour tap into a certain sinisterness through the production and layering of the song while still maintaining the stomping energy that they have really made their own.

This inherent menacing yet driving flavour to the song is something that director Allan Brady sought to capture when putting together the music video for ‘Under My Skin’, saying: “Each film clip I do I try to create a visual style that represents the song, if I’m working with a song that’s a bit more relaxed or subdued I’ll use a dolly or a gimbal and try to make it flow etc. I remember seeing an interview with Nicolas Winding Refn the director of Drive, which is one of my favourite films, and he talked about his use of dollies/steadycam in almost every shot with movement, because he wanted the camera to feel as if it was moving like a car, I didn’t pick up on this consciously but I absolutely had that feeling when I was watching the film without even knowing it.” 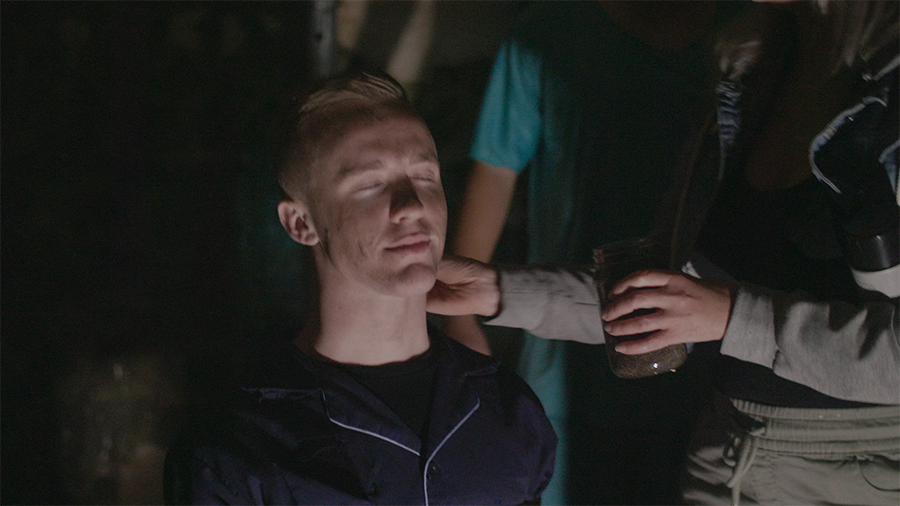 ”The way you use the camera/lenses and all the supplementary equipment has an effect on your audience, and it’s always best to go with your gut. As creatives we like to think we have a unique mind, but the truth is most people think the same way, so if you get a certain feeling from a song or a certain aesthetic, the chances are the wider public will too. The song is high energy with a thrash-y feel, so what we see on screen had to reflect that.”

“For this clip the main sources of inspiration were the clips for Nine Inch Nails – Closer, Aphex Twin – Come to Daddy (in my opinion the best clip of all time), the films A Clockwork Orange, One Flew Over the Cuckoo’s Nest and a bunch of these genuinely terrifying photographs from insane asylums from the 1900’s, these photos were so fucked up, I hated looking at them but I kind of couldn’t help myself.”

Drawing on these more off-kilter and at times even eldritch inspiration points has given Brady the tools to build something which really reflects the darker and edgier parts of The Witching Hour’s sound, which came very much in handy for Brady when putting the concept together: “I conceptualised this idea with the country music artist Katie Jayne, we pretty much worked on every aspect of the clip together. Because this was a very low budget film clip we worked out what locations we had access to, then reverse engineered a narrative from there.” 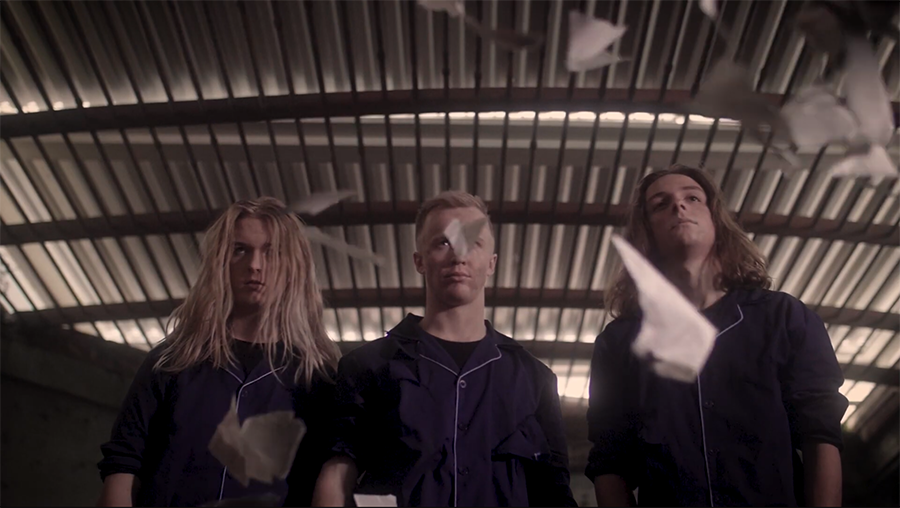 The Witching Hour – ‘Under My Skin’

“I personally love films/TV shows about dystopias, so we tried to jam as much of those themes in there as we could. I do a lot of writing and I’m a huge fan of three act story structure, the music video medium is such an experimental one you can essentially practice art-house storytelling and break and bend a lot of traditional rules, so we tried to create a narrative with this in mind.”

‘Under My Skin’ follows the band undergoing a forced re-education process at the hands of a sadistic Nurse Ratchet type. When normalisation techniques such as visual stimuli and creepy occult-ish religious conversion fail to have any effect on them, the Nurse and her cronies resort to full-on lobotomies, successfully turning the band members into vacant smiling conformist good boys.

Brady explains: “I really find it refreshing when the bad guys win, the film Hereditary stuck with me for this reason too, we wanted to create a hopeless feeling, but still have a kind of third act pay off at the end. We tried to create a linear narrative, but with enough ambiguity to shroud some major plot points in mystery to keep it interesting.”

While the performance shots of the video are delivered in a dynamic and at times frenetic manner, a perfect characterisation of the band’s inherent energy, Brady delivers the storyline segments of the video in this dreamy almost trippy slow motion. Brady elaborates: “I see so many great music videos coming out daily, but the ones that to me don’t quite cut it don’t have enough shot variation, the most typical combination being wide, mid, close (to over-simplify) but now that most (even pro-sumer level cameras) have amazing slow motion it’s absolutely worth utilising.”

“The band shots are shot at a super high shutter speed, on cine-lenses with a super shallow depth of field, so everything is shaking, super intense and going in and out of focus, it’s fun for a little bit, but can get super draining, so I find it really helps the audience readjust if you have nice, in focus, centre-framed slow motion shots so the audience can relax their eyes for a second, before heading back into the manic band shots. And a secondary reason is it kind of works like a visual motif, when the audience sees the slow motion shots they go “right, so this is the narrative” whether they know it or not their brain follows the story and starts piecing together the narrative before going back to the more hypnotic visceral band shots.”

The Witching Hour – ‘Under My Skin’ (BTS Photo by Brent Jeffery)

Building the video somewhat backwards from the locations has meant that Brady has been able to pull so much from the surroundings. From the clinical psych-ward hallway to the terrifying padded cell, there is so much character in the settings.

“This clip was shot in 3 locations, The Lockup in Newcastle, this location was amazing, one of the coolest places I’ve ever shot, and the other location was the suburb I grew up in Rathmines, at the Catalina Function Centre and the park across the road. The Lockup had the big exercise yard with the rusted bars, it had great natural light coming in, so I only needed about 3 more LED’s balanced to daylight to make that room pop. The padded cell (which was the selling point of that location) was also there, it’s a terrifying work of art, old, antiquated, and after the declaration of human rights were agreed on, I don’t think acceptable to put a human in anymore. I can’t explain it, but it’s a super awful vibe in that room, myself, Katie and the band hated being in there, but we feel we managed to capture the essence of that room in the clip.” 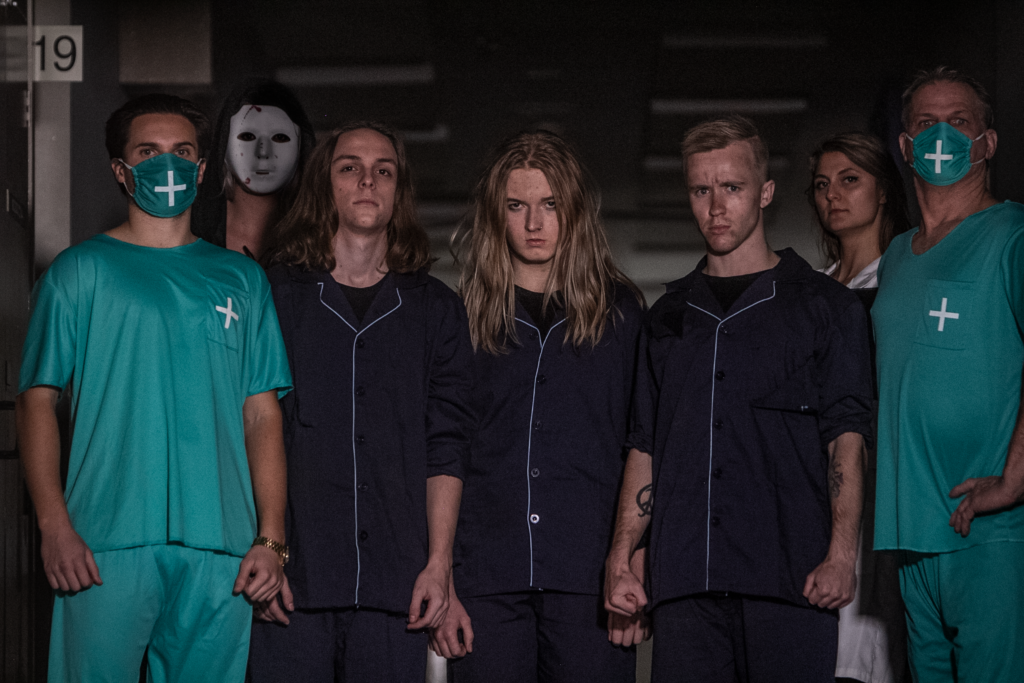 “The major issue with this location was we had it for 2.5 hours, including set up / lighting. So, we did all the band shots, padded cell shots, projector shots and occult shots all in this time. I always work in tiny crews so me and Katie did everything, I directed, did lighting and shot, Katie set up each room, did the blocking / make-up costuming and produced / first AD, it’s actually hard to say who did what role on set because there was only two of us and there was so, so much crossover.”

“Katie Jayne was a massive help, she’s from a totally different musical world, but she’s super switched on and picks up really quickly on the vibe that you’re going for and helped massively with achieving the look we got on camera, while I was setting up gear she made the band feel super comfortable and kept a fun vibe on set (seriously one of the most underrated film skill sets ever) massive massive kudos to her.”

Here is the official video for “Under My Skin”