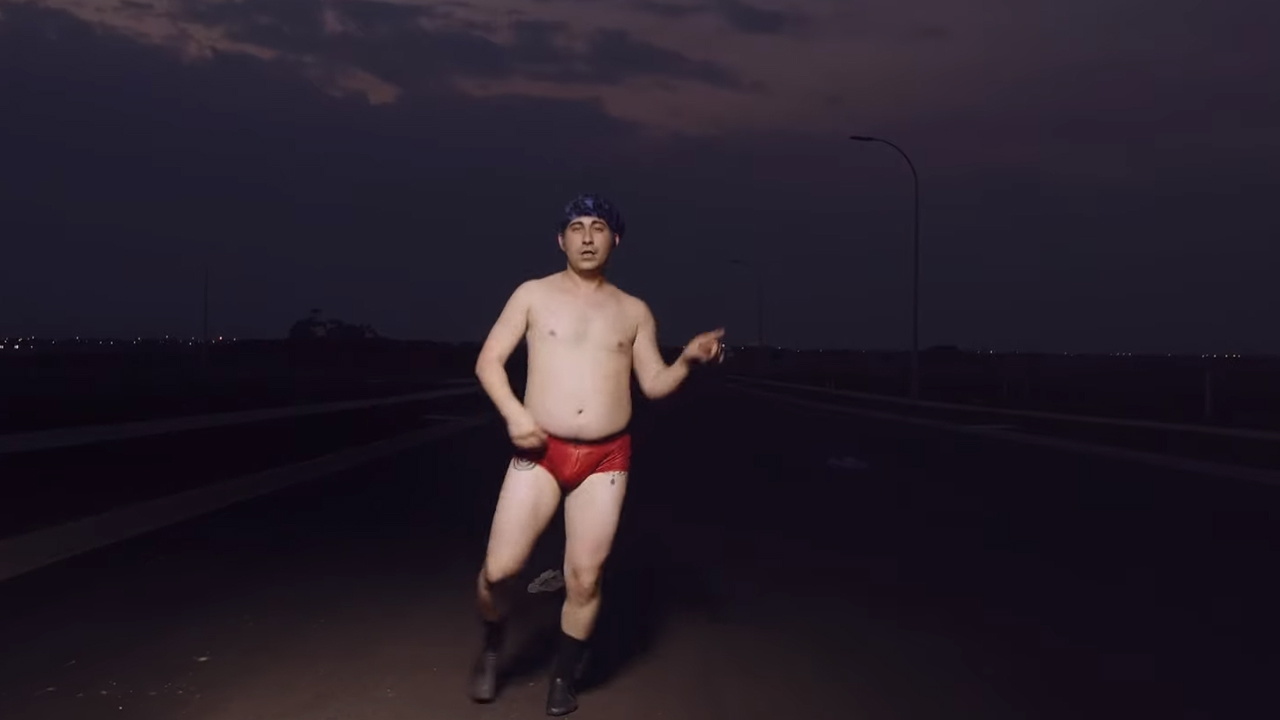 [dropcaps type=’normal’ font_size=’60’ color=’#ed145b’ background_color=” border_color=”]T[/dropcaps]he lone dancer music video genre contains some undeniably memorable and iconic clips. From Christopher Walken’s logic defying romp for Fatboy Slim’s ‘Weapon Of Choice’, to The Black Keys’ perfectly awkward ‘Lonely Boy’, the clear defining factor of the success of these videos is charisma. Whether it’s the born in charisma of a Hollywood actor or the sheer joy of a childlike confidence, the final product is charisma.

For Alex Badham, an extremely accomplished filmmaker who has helmed videos for the likes of Paul Dempsey and Oh Mercy, when it came to putting together the video for his own musical project Victory Lap, he called on performer Jonathan Homsey to help create a new entry into the storied genre: “Working with Jonathan on this was super fun, as always. I just sent him the song and said that I wanted to do a single-tracking-shot thing, and we basically just threw some ideas around.”

‘Pepsi Ad’ grooves with a certain New York post-punk coolness. Sitting somewhere between Talking Heads and The Strokes, it’s undeniably dancy, but also quite sparse and understated, creating a perfect canvas for Jonathan Homsey to paint on. Badham explains: “I think it was his idea to wear a crazy amount of clothes and do a striptease. The shoot day got to 41 degrees, so there might have been some moments where he regretted that… I didn’t have much input into the choreography, a few subtle tweaks here and there, but mostly this was an opportunity for Jonathan to go nuts and do whatever he wanted. It was fairly loosely choreographed, he just had “moments” to hit with the song, and then fill in the gaps with whatever manic strangeness came to him in the moment.”

There is so much life in Homsey’s performance, an oozing self confidence that becomes completely and charmingly engrossing in the few moments Homsey ever so slightly breaks, laughing and delighting in the situation. The performance made all the more absorbing by the choice by Badham to present the video as one long continuous shot, beautifully lit and back-dropped by a gorgeously waning twilight. On the added urgency and pressure of a one-shot video, Badham muses: “I wasn’t really nervous in the lead up to this, I’ve worked with Jonathan quite a few times and know that when it comes time to shoot, whatever he pulls out will be 100% killer.”

“All the gear was either mine/borrowed for free, so if something went awry and we had to reschedule, it wouldn’t have been a huge deal. I was a little bit nervous about our lighting rig toppling onto Jonathan, but we had a bazillion sandbags on that thing and some fairly lightweight LED panels that wouldn’t exactly flatten him. And as you can tell, he’s a pretty nimble guy and could get out of the way quick-smart… my main concern was how good a sunset/magic hour we’d get. We shot in a part of Melbourne’s outer west that I like to shoot in quite a lot – it’s an ever-changing sprawl of half-built suburbs in a west-facing expanse of nothingness, so there are great sunset locations.” 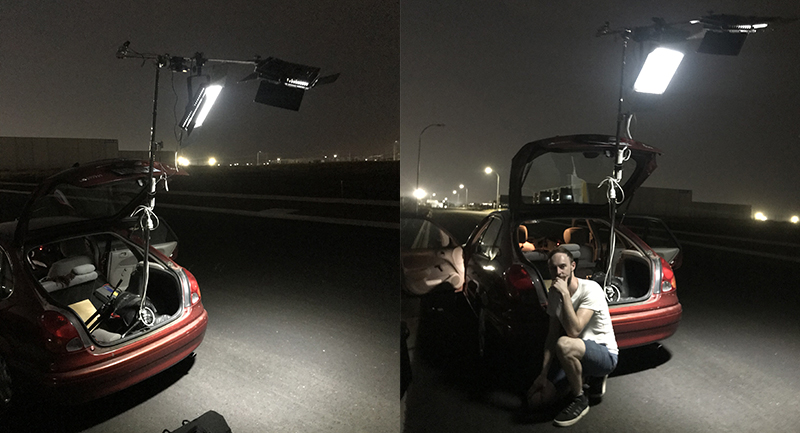 “I use the “sun seeker” app on my phone, and sunsets are at their longest in summer, so it’s not super hard to time it right. But you never really know how good it’s going to be. The day of this shoot was really hazy from bushfire smoke, which sometimes creates a crazy otherworldly orange glow at sunset. But on this particular night, the cloud cover killed it a little bit. I’d give this sunset a 6.5 out of 10. We did three takes in total, and ended up using the second. Whenever you do one-shot videos, it’s pretty rare to get one take that ticks all the boxes in terms of performance, camera, lighting etc. but this one was a no-brainer. Although… the first take had some special first-take-magic to Jonathan’s performance.”

Magic is a great way to describe what’s happening in ‘Pespi Ad’, it’s such a simple concept that relies on a lot of small factors coming together to work. Even just the way the surf guitar arpeggios give a lift to the mood of the song and Homsey echos that in his performance with some extra wavy arms or looseness of his body, it’s a beautiful thing. Though this certainly isn’t Alex Badham’s first foray as such, considering all the massive artists he has worked with, how did it differ when it’s for his own musical project?

“If I’m being honest, I don’t really have any ambition to have a career as a musician, so the stakes feel pretty low making a video for myself. I think having someone relying on me and an aversion to disappointing people is a big motivating factor. So I was treating this as a “fun” video to do without any outside expectations or pressure. A pretty loose and relaxed project, just a sneaky lil’ afternoon messing around Melbourne’s creepy outer suburbs.”

Here is the official video for ‘Pepsi Ad’