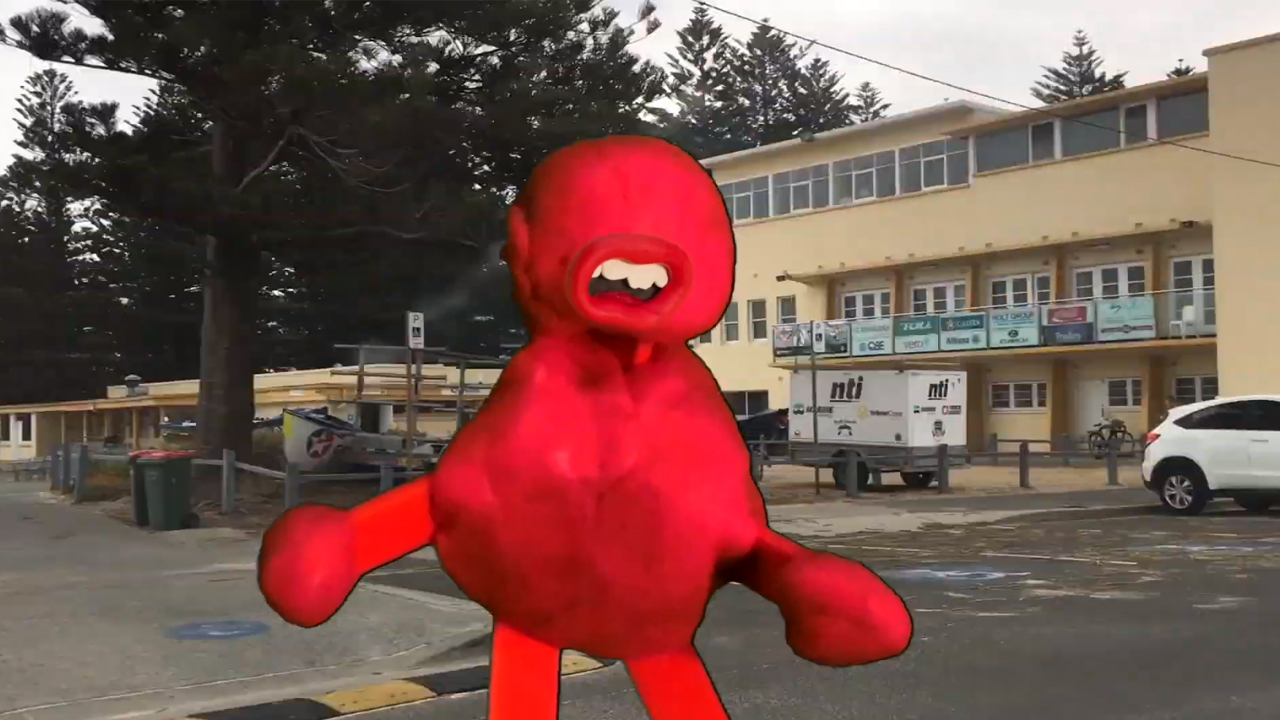 [dropcaps type=’normal’ font_size=’60’ color=’#ed145b’ background_color=” border_color=”]I[/dropcaps]n a digitised culture where ‘influencers’ laxly popularise anaesthetised images, smothered in sedative sounds, just to spill the milk becomes a poetic gesture. Sometimes it takes angry kids with amplifiers to provoke the waking up, the cursing and the subsequent banging on the walls. Thank goodness that in some neighbourhoods the plaster is still thin.

The wild new music video for WAWAWOW’s ‘The Big Cookoff’ is a high-octane psych-rock odyssey that spits in the face of sterility, transitioning between distorted guitar solos and unconstrained amateur visuals. The band’s drummer, Shaun Allen, who worked on the clip’s animations, spoke to us about composing the track: “Almost every other song we have evolves out of a jam session, but yes much like the modern history of Sydney, this song was a dumping ground for every unused riff the band had. It came from all these jams that we Frankensteined together in an awkward mess, as indicated by its working title Chindergarten Uranus Wombat Richard Burst Gasping Mum Syndrome. But it then became a purely live experiment, and we jammed it out and trimmed the fat at gigs over about 12 months until it became what you would call a song.” 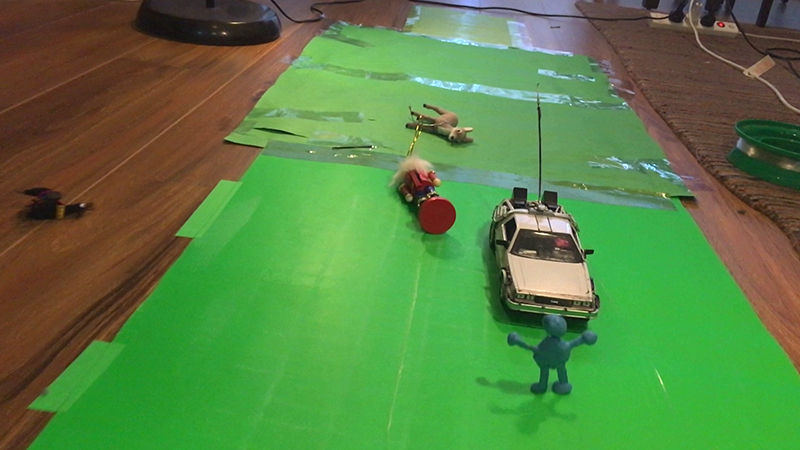 There is an audio sample containing a spoken word commentary on humanity and metropolis that weaves its way through the song, sounding like a mixture of Marshall McLuhan and Allan Watts. “I started combining our music with older samples as part of this podcast I was editing called In Brackets, because they added some emotional weight to the instrumental jams,” Allen explains. “I heard this voiceover narrating a documentary at a museum and knew instantly it captured what we wanted to say. It was a perfect snapshot in time of how excited people were at Sydney developing economically and physically. Very different to today.”

“Obviously most of the sample comes across ironically, particularly focusing on development and the desire to ‘knock it down, build something new and bigger’. But strangely, for other narration earlier on in the video, we felt complete agreement with the statements about the city actually being a wonderful place. And that’s a huge part of it. Sydney as a city has pretty much been a punching bag since the 2000 Olympics, and we can’t remember the last time we heard someone say something nice about it. Even with all its many obvious problems and skewed priorities, we wanted to take a chance to celebrate our over-regulated and over-leveraged city.” 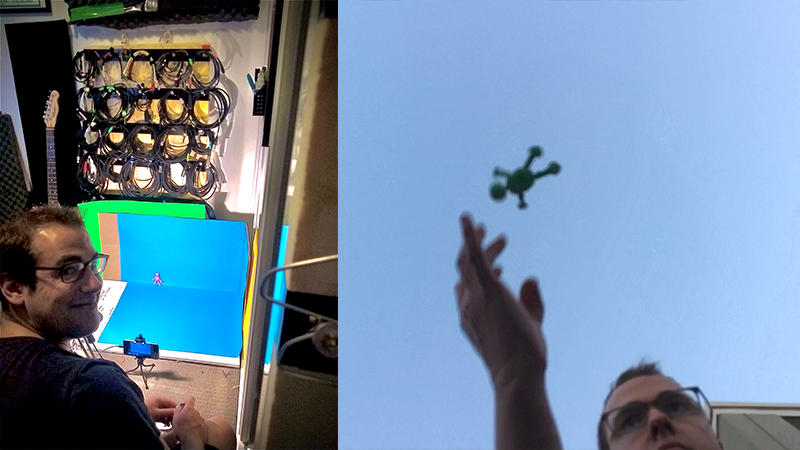 Through the video there is a whacky combination of animations, including claymation and psychedelic visuals that call back to the more experimental acid-soaked imagery that once played on ABC’s Rage. Of the clashing images Allen explains: “We knew we wanted to do something related to the city, but the idea of awkwardly filming ourselves in public seemed far too out of step for our personalities. None of us had experience in animation, but we’re all huge fans of amateur and mistake-ridden art in any form.”

Amateur, do-it-yourself visuals fit into WAWAWOW’s ethos, where like many of their indie and punk predecessors, a constriction of resources can encourage invention and, often, snarky humour. “There’s something fantastic about art from people that don’t know what they’re doing, so despite never filming or animating anything in my life, I figured I’d get some blu-tak, coffee stirrers and a dash-cam and see how it went. If I screwed something up with the blue screen or a character fell over for a frame, it was just more interesting to include it. It’s clearly not ILM, so once you abandon the pursuit of suspension of disbelief, you’ve got a lot more freedom to mess with the ideas. It bled into the other footage too, some of the best live band shots were of us trying to operate the lights or fix something that fell over. It’s that mid 90s mindset, that golden space between funny and good.” Allen suggests. 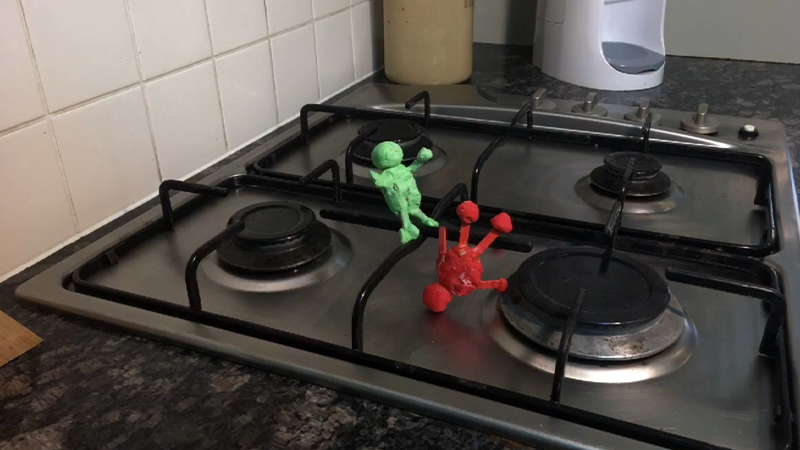 The song and video play out as a kind of ode to the weirder and wilder sides of Sydney, particularly its inner west, where over the decades art and more experimental approaches to living have bloomed (or erupted). The band consider Sydney an under-appreciated, and at times stifled, place of creative possibilities, where even its progressive inner city neighbourhoods are plagued with high rents, commercialised art spaces and dinosauric prudence.

“The amount of amazing comedy and music and film that comes out of this city is incredible given the roadblocks that come up against it from every direction. I truly believe the art-from-adversity idea is key to much of the creativity that comes from Sydney. Consider that pretty much no artist can afford to buy a tin shed in the entire greater metropolitan area. Giant Dwarf theatre can’t afford the rent, the Annandale Hotel now serves sliders instead of culture, the heavily planned live music district was straight up dropped and NIMBYism is almost synonymous with the city. We literally had to record some jams silently using headphones and electronic drums (later overdubbed), and even then received noise complaints about the sticks hitting the rubber pads! In a garage! Underground! At 9pm! It’s insanely anti-creative, and it’s not easy, but it’s about finding something new in the gaps you’re forced to squeeze into.” Allan reckons. 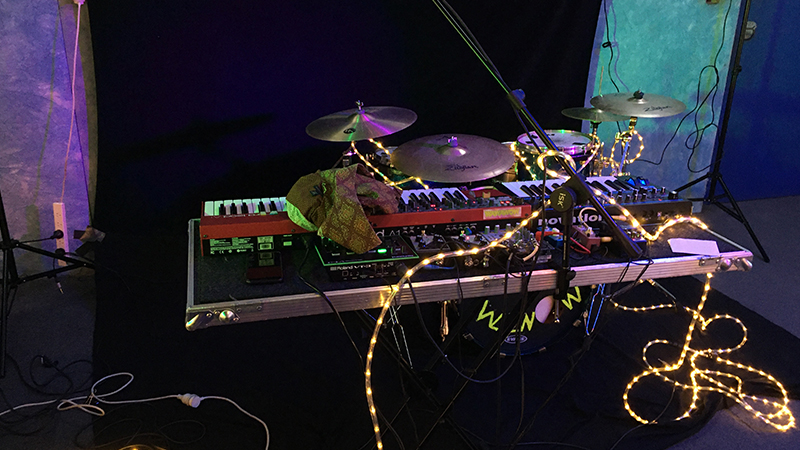 The Big Cookoff contains a series of rugged city shots, as well as archival footage of an older Sydney, which evoke the New York cityscapes captured by D.A. Pennebaker in his 1953 Daybreak Express – this sense of motion intensifies as the roaming city shots are layered with psychedelic visuals and whacked out Warhol-esque performance clips. The clip’s volatile and improvised energy, Allen explains, gestated out of a planned blueprint:

“The animation was intricately planned. Originally the whole video was meant to be animation, and so I did have a storyboard about what was meant to happen in each location and got all the footage together. All the stop-motion and blue screen layering was combined first in case the live footage didn’t happen. So there is another animation-only version of the video ready to go that we will release at a later date. In the end though our vocalist Wade was the one who got the live shoots going with giant lights and crazy editing, and intertwined it with the animation short in a way that made sense and grounded it a little closer to reality.”

Frenetic energy and a multiplicity of images gives ‘The Big Cookoff’ an honest edge of spontaneity in a culture where perfected minimalist aesthetics are taking the fore, and perhaps losing touch with the real world; WAWAWOW take the duplicitous culture they see and hurl back something cosmic and out-of-control. However, Allen considers WAWAWOW’s sonic and visual chaos something less of a socio-political commentary, but more of an instinctive response to rapid change: 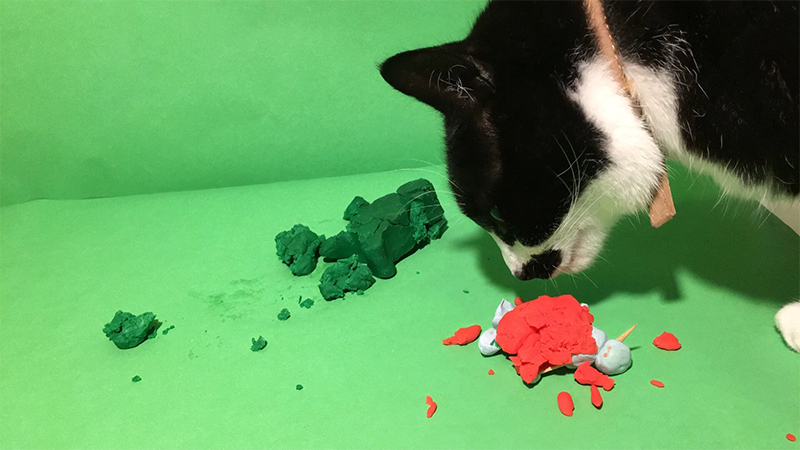 “Here’s what I wish the answer was: ‘The world is a mess. The country’s covered in both smoke and hailstones and the leaders put their heads in the sand. Any attempt to keep aesthetics simple in any form is disingenuous and we choose to respond with chaos.’ But the real answer is, we’re just a bunch of neurotic, overcaffeinated weirdos that cannot stop tweaking ideas. Better artists than us can translate all the chaos of the world into a simple poignant piece, but we literally don’t know how to do anything minimally. We just keep twisting and gluing until we’re forced to put the toy back in the box. It’s frustrating and exhausting and probably pretty obnoxious, but we wouldn’t have it any other way.”

Here is the official video for ‘The Big Cookoff‘