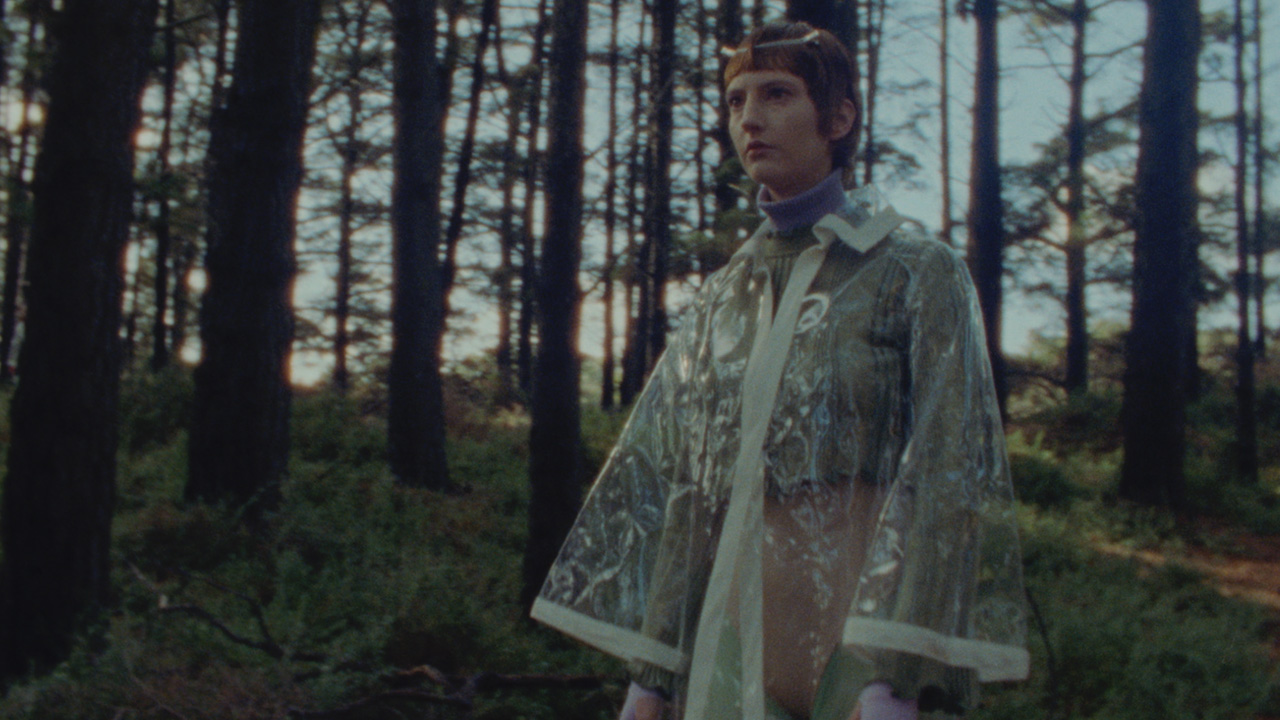 [dropcaps type=’normal’ font_size=’60’ color=’#ed145b’ background_color=” border_color=”]T[/dropcaps]wo extra terrestrials, bonded in a way that might not quite make sense to human observers, move through a coastal forest and share meaningful glances inside dystopian architecture. Heavenly, directed by Levi Cranston for 4 piece indie punk-rock band Sputnik Sweetheart, is a character study without words. For Cranston, his primary goal with the clip couldn’t have been simpler:

“I was interested in that feeling that happens when you say something silly or regretful to someone you care about, something in the moment, and suddenly the opportunity to reverse that is taken away. So naturally I turned to aliens to express this. Surely aliens must feel this too, right?” 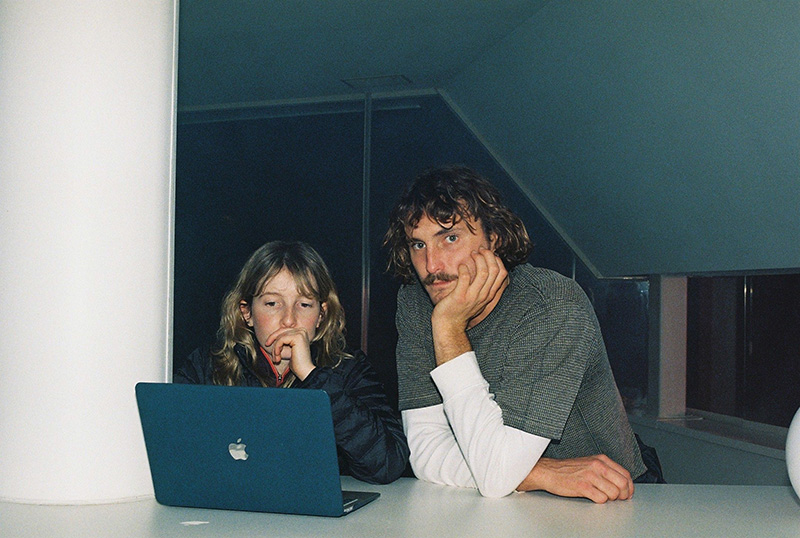 The two leads are stoic in their movements, often mirroring eachother’s motions in some kind of alien social ritual. There’s an unmistakable regret conveyed in the blank expressions and long stares. Frequently we see their faces superimposed onto each other, their eyes, ears and mouths forming one complete head. We see overlaid glimpses of landscapes turned alien  – perhaps places that the pair have been before, or will go in the future. Sputnik Sweetheart themselves only appear briefly at the climax of the song, performing with electric energy in a haze-filled abstract space. This is intercut with shots of one of the aliens, alone in a now lonely space, crying out for what she lacks.

“The texture of the track really swelled there and I wanted something frantic, frenetic. I had always wanted to do something along the lines of an abduction, and the EP brief by serendipity called for a “UFO beam.” So we flip into that wild anything-goes sci-fi light and I just wanted to overload the viewer. I think there’s something beautiful about introducing the band into an atmosphere that you have already settled into. If the story captivates the viewer it works fantastic. If not, I failed everyone.” 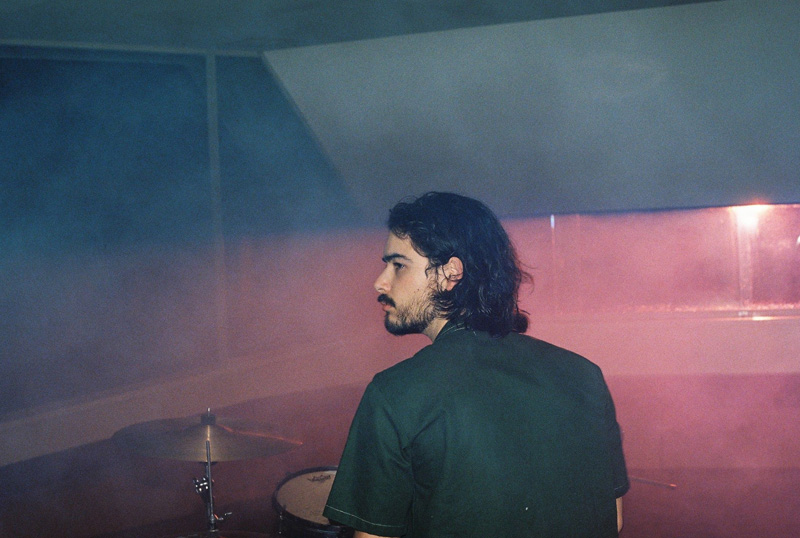 “We [designer Emma Tomm & assistant to director Kristian Hawker] came across some flamboyant 70s aerobics instructor outfits and built the costume upon that. We wanted to recycle that retro-futurism. It’s so bright and fun and matching. The real future is too bleak and we wanted some colour anyway. Costume became interesting as second skin. Sort of like an ET version of Bananas in Pyjamas, with the matching outfits with a distinctive flourish. Emma and the seamstress made the bodysuits and PVA jackets from Bunnings materials. We were going for an astronomical aesthetic on a very down-to-Earth budget. Jules [Nolan, Hair] had these hair clips in while piecing together those beautiful crescent fringes and I thought they looked like antennae and decided to keep them in right before we rolled off the first take.” 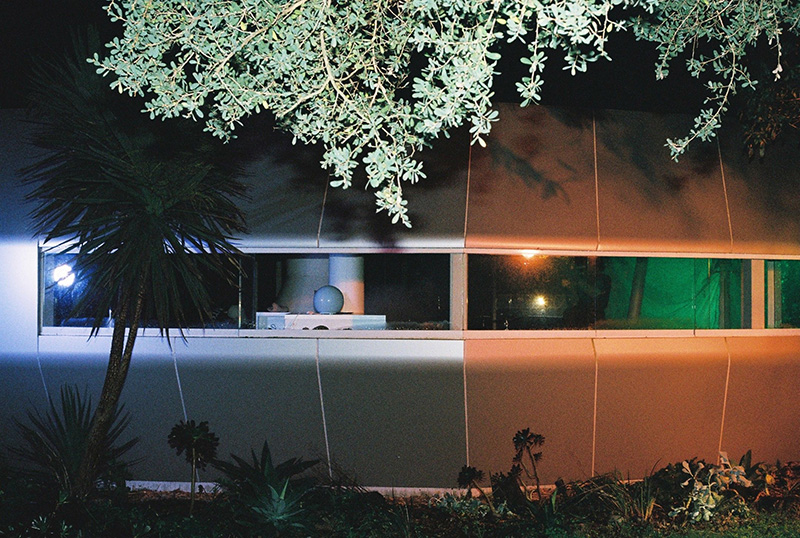 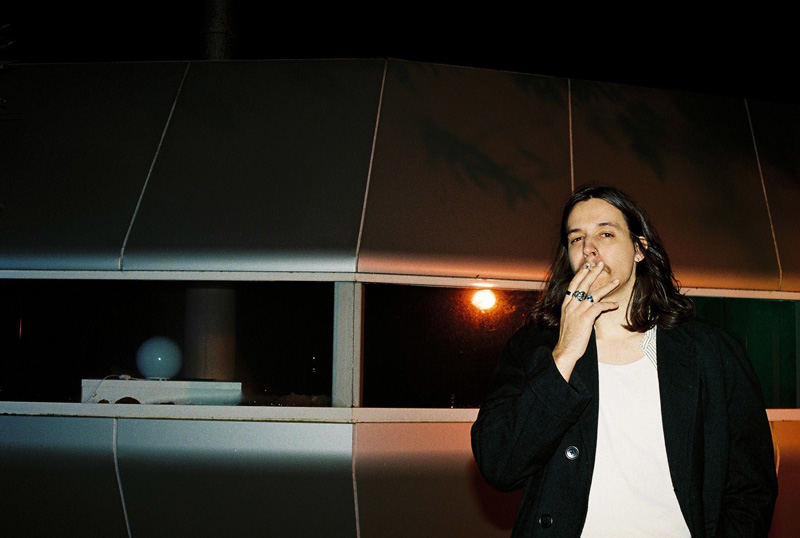 The glass walls of the character’s habitat make the location look equal parts futuristic apartment and zoo exhibit. The real world location is Cape Schanck House in Victoria’s Mornington Peninsula, a strange and beautiful dwelling with unusual interior pylons and a distinctive teardrop shaped water tank in the center of the living area. The camera peers in from the outside to observe their everyday habits, their occasional breaks from synchronicity and waking shrieks in the night. In the tail end of the clip, DP Elliot Deem transforms the space with smoke and coloured lights, intentionally reminiscent of a classic alien abduction scene. The outdoor scenes are intentionally framed tight with eye catching architecture or towering trees in the background – it’s a familiar sight but it doesn’t feel out of place in context with the retro sci-fi characters. Cranston reflects on the adventure and romance of the coastal area that he first felt during the location scout:

“The wind is threatening and the atmosphere cold and volatile. The skies were a carousel of charcoal clouds, blue patches, and hail. The rain would swirl in front of us as the wind whipped around and became dramatic. On a scout down to the cape we were marooned by a rain storm and had to hide under the cape’s timber boardwalk. Elliott got caught out changing mags as the Bolex jammed and a squall was thundering towards us. Nearby a monumental RACV resort looked like a foreboding fidget spinner made of rusting steel and windows. En route to the cape stood a tall, lonely pine forest. Claudia [red head alien] picked some forest mushrooms which we fried in butter the following morning. It was a desolate barren windswept edge of the world. It was alien and perfect—tough work and unforgiving and we lived every moment of it.” 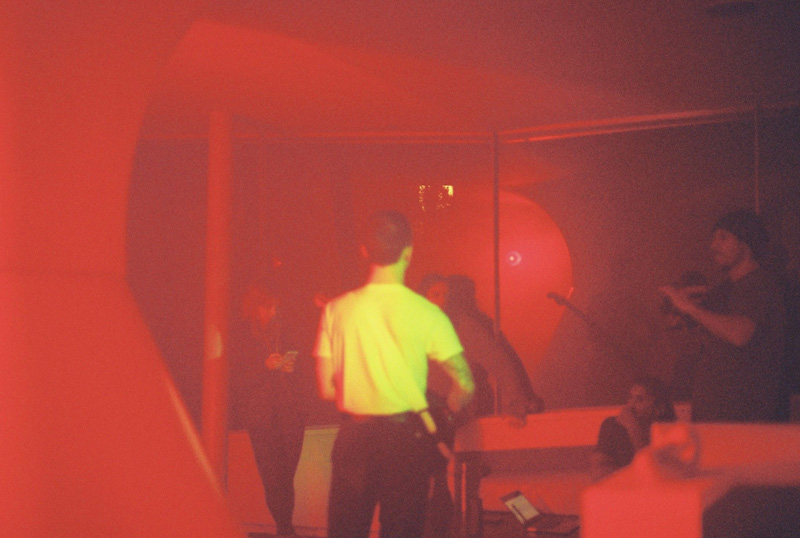 Fellow musician and multitalented creative Angeline Armstong (Of Telenova fame) partnered with Sputnik Sweetheart to lead the creative vision for the entire EP. Having already managed artwork, photoshoots and assets, it was natural that she serve as the production’s creative director. She explains her enthusiasm for the project:

“It was an absolute joy to work with Sputnik Sweetheart on the visual world around their EP. I’m really picky about the projects I work on and on a first listen I was struck by the evocative sounds and literary quality of Sputnik’s lyrics – conjuring worlds beyond just a bunch of friends rocking out in a garage. “Heavenly” in particular has a really ethereal, existential quality to it. Levi was the perfect fit to bring the sci-fi/surreal universe that we were going for to life with his characteristically retro cinematic style.” 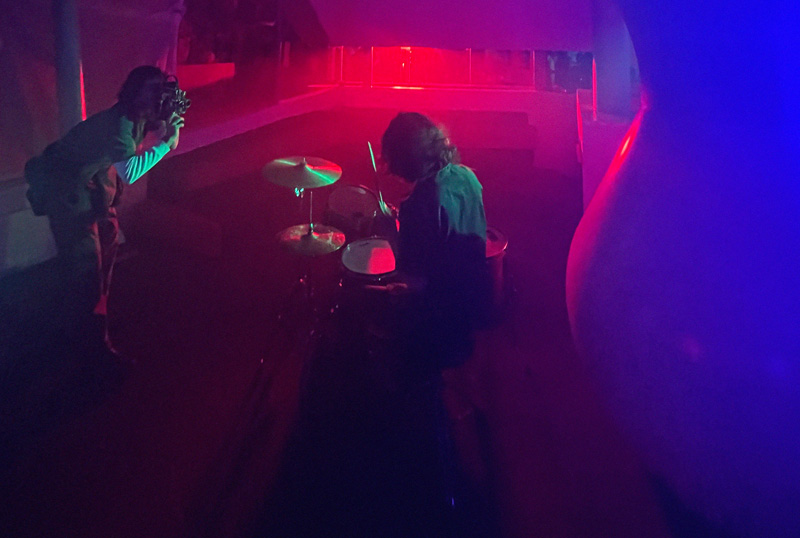 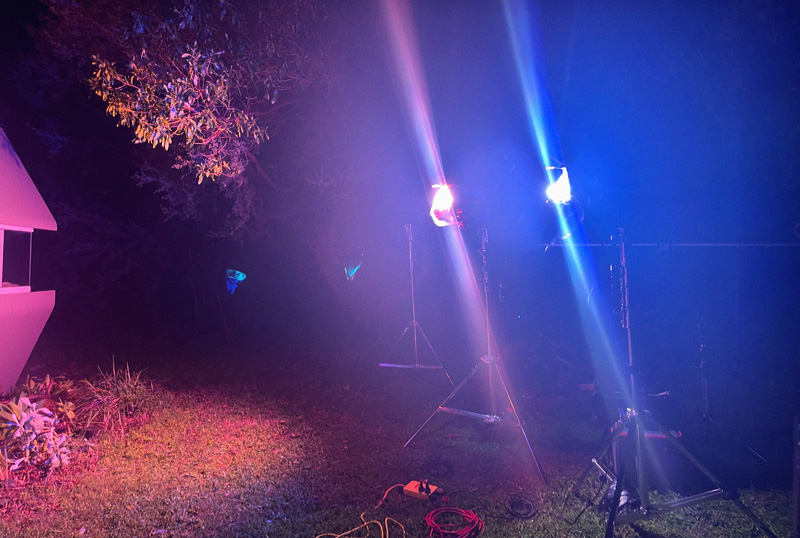 The decision to shoot on a Bolex H-16 16mm film camera was key to matching the retro-future aesthetic, though working with vintage equipment proved to be a trial within itself. Old c-mount lenses tend to be a little softer than modern sharp lenses, and the natural smoothness of 16mm gives the whole video a dreamy soft sheen. Cranston intentionally contrasts the softness of the frame with the hardness of the actors’ faces. He declares:

“Seriously, Elliott and I vowed to never shoot a Bolex again. It has a heartless viewfinder in low light. We shot on primes and a zoom, but the the catch was this rare Agenieux 25mm with an F/0.95 aperture—just like what Kubrick shot Barry (1975) with in the 70s, and now and then we just didn’t nail that ridiculously razor thin field of focus. Elliott shot chiefly in overcast conditions to keep things soft during the ‘day’—but in reality it was dark most of the time and we couldn’t see through the bastard split-prism VF. The actors themselves remained largely stoic, and I think their faces lend a great softness emotionally. This is important. You can have a soft aesthetic and a hard face and it is something else. I had asked them both to keep on a mask. The rest we owe to Kodak and the black magic of photosensitive emulsion and processing.” 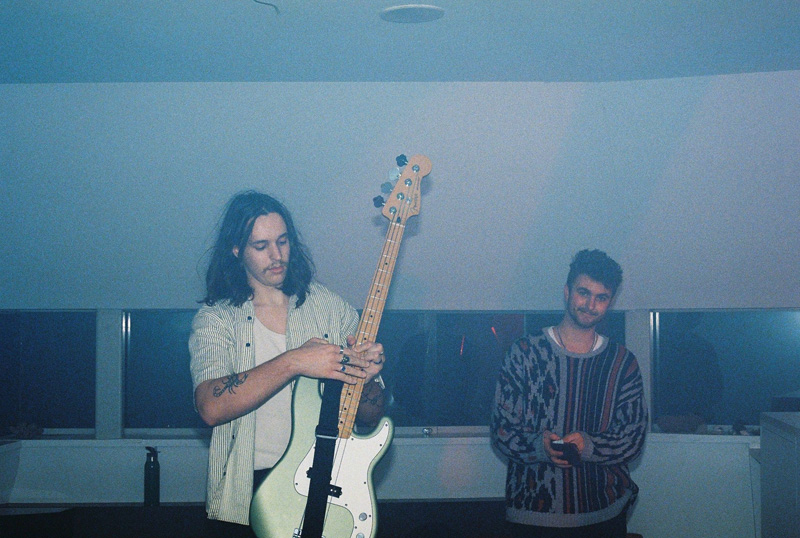 When asked what’s next, the director had only this to add:

A little Marvel flick perhaps, or maybe Sumatra. Probably Sumatra. A one way ticket, a motorbike, and two surfboards. Maybe take some 16mm and see what happens.

Whether he’s braving the windy and rainy coast of Victoria, or sipping something on a golden beach, Levi Cranston’s next creative piece is sure to dazzle.

Here is the official video for ‘Heavenly‘